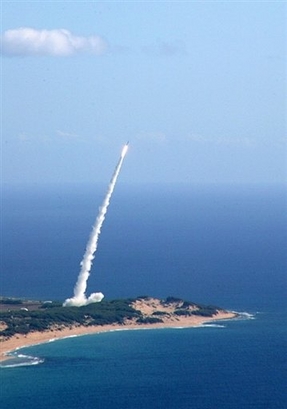 Poland doesn't look like this, but this is the missile they are getting.

Russia is up in arms and threatening to ‘punish’ another former satellite nation for daring to go against the Russian views of the world. Under a deal signed yesterday, Poland will host 10 missile interceptors designed to knock out short-range ballistic missiles from Iran or another MIddle Eastern power. Nonetheless, Russia feels their approximately 1,500 nuclear warheads to be under threat from these 10 missiles.

At a news conference on Friday, a senior Russian military official, Colonel General Anatoly Nogovitsyn, suggested that Poland was making itself a target by agreeing to serve as host for the anti-missile system. Such an action “cannot go unpunished,” he said.

Poland, in signing the deal, learned a few lessons from the Georgia crisis. First they’re getting some air defense missiles (manned by Americans temporarily) and second they got an assurance about US military power in case Russia gets mad:

…the United States would be obliged to defend Poland in case of an attack with greater speed than required under NATO, of which Poland is a member.

Guess they learned about the Blitzkreig the hard way and don’t want to see it repeated from the East. If there is going to be some military action against the Poles, they want an American ‘tripwire’ (i.e. some Americans who will be killed in the first few shots) and fast reinforcements.

4 thoughts on “Russia threatens to 'punish' Poland for missile deal”