This is getting to be a bit repetitive…

The head of a children’s charity was found shot dead in Chechnya today, a day after she and her husband were abducted by armed men. The bodies of Zarema Sadulayeva and Alik Dzhabrailov were found in the boot of a car in a suburb of the capital Grozny, the human rights group Memorial said. The murder of Ms Sadulayeva comes less than a month after a gang kidnapped and killed Natalia Estemirova, another prominent rights activist in the turbulent southern Russian region.

Ramzan Kadyrov, the leader of Chechnya, will likely face some additional pressure after this latest killing.  Kadyrov is often accused of removing some of his opponents, and the head of the charity where Sadulayeva worked recently accused Kadyrov of orchestrating a campaign of murder and intimidation.]]>

I guess when you are unemployed there really isn’t the need to go anywhere.

Moscow’s chandelier-adorned metro, ranked as one of the world’s busiest, said passenger numbers had fallen by 7 percent in the first quarter of 2009 from the same period last year. The number of people travelling on the Stalin-era system has fallen by an average of about 700,000 a day in April and May, said Moscow metro chief Dmitry Gayev.

It is a pretty subway system.  The turnstiles however, can kill.  If you mess up pulling your card out of the system expect to be impaled by those things.]]>

So, today a bridge was blown up by the Taliban that is on the main supply route to Afghanistan.

The Russians announced a multi-billion dollar aid package for Kyrgystan.

Kyrgyzstan (moments later) announces that the US airbase supporting Afghan operations should be closed post-haste.

Isn’t it just amazing the coincidences???

Moscow was apoplectic the other day when reports filtered in that a Russian soldier had been captured by Georgian forces inside South Ossetia. They demanded his immediate return claiming he was being held against his will.

Geogian forces replied by displaying him at a local McDonalds eating a Big Mac.

“I came to the Georgian side of my own will, to ask for political asylum because I had problems with the commander of my battalion,” he said.

Russia just hasn’t been the same since the arrival of the Golden Arches. It has a very powerful and strong pull for young and starving Russian conscripts.

Because Natural Gas just doesn’t seem to be a viable option, given that most of the supplies are locked up in Russia and Gazprom really likes to play politics. Nearly 50% of the Ukraine’s (excessive) power consumption comes from Natural Gas, and nearly 75% of those supplies are from Russia. Ukraine has quite a bit of coal, and I’m sure the US would be willing to sell them more at a very discounted rate.

However, if the Ukraine was to go all coal, just think of the black soot they could put up in the air and left drift to the East? Or maybe they could just turn off the lights now and then:

“Ukraine is one of Europe’s largest energy consumers, and it consumes over twice as much energy per unit of GDP than Germany.”

Here is Russia Today gloating about the cutoff.

Civil war could break out in the predominantly Muslim area of Ingushetia according to human rights groups have been witnessing an uptick in violence of late. Just last month a prominent critic of Moscow was shot dead in Injushetia and Muslim fighters who got their start in Chechnya are now growing bolder and bolder.

We’ll be watching this flash point as the Georgia situation continues to fester.

That’s what you get for invading your neighbor.

Russia has been badly affected by the global financial crisis, and has suffered as stocks have sunk in Europe and Asia. But it has also been hit by the rapid fall in oil prices and the flight of foreign investors since the war in Georgia.

Of course had we not bailed out AIG last night, we could have seen something similar in the US, UK, Tokyo etc as a number of institutions fell apart. I was watching shares in my local bastard monopoly electric company Consolidated Energy Group (CEG) yesterday. CEG was tied to Lehman and rumors had some exposure to AIG that would have dragged them through the mud. Their company, which has about $15 billion worth of nuclear power plants suffered from some massive shorts and saw the stock drop from about 60 to 13 in a matter of minutes, then up again, then down. It was really strange.
More excitement today as I deal with a quick sale of Washington Mutual stock (WM).
]]>

Well, that’s what you could say after reading Debka today.

Apparently Russian commandos raided Georgian airbases that were hosting Israeli spy drones, used to look at the nuclear facilities of Iran. This was the result of a secret agreement between Georgia and Israel to allow Georgian military facilities to be used in any attack on Iranian nuclear weapons plants. However, the Russians seized the drones and turned them over to the Syrians and Iranians after the invasion of Georgia.

It’s Debka so your mileage may vary…

<![CDATA[ <p>The USS Mount Whitney, flagship of the Sixth Fleet (and heavily laden with intelligence gathering gear) has arrived in the city of Poti, despite the presence of Russian forces at checkpoints outside the city. 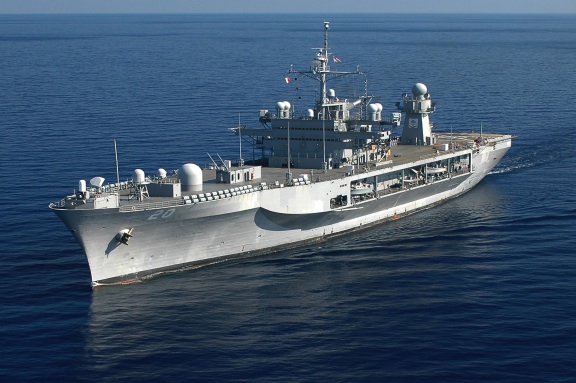