UPDATE: PA Avenue is now entirely closed between 15th and 17th.Hazmat teams have just arrived at the White House. Penn. Avenue in front of the White House has cops every 50 feet or so. Not sure if I should stick around to find out why…. 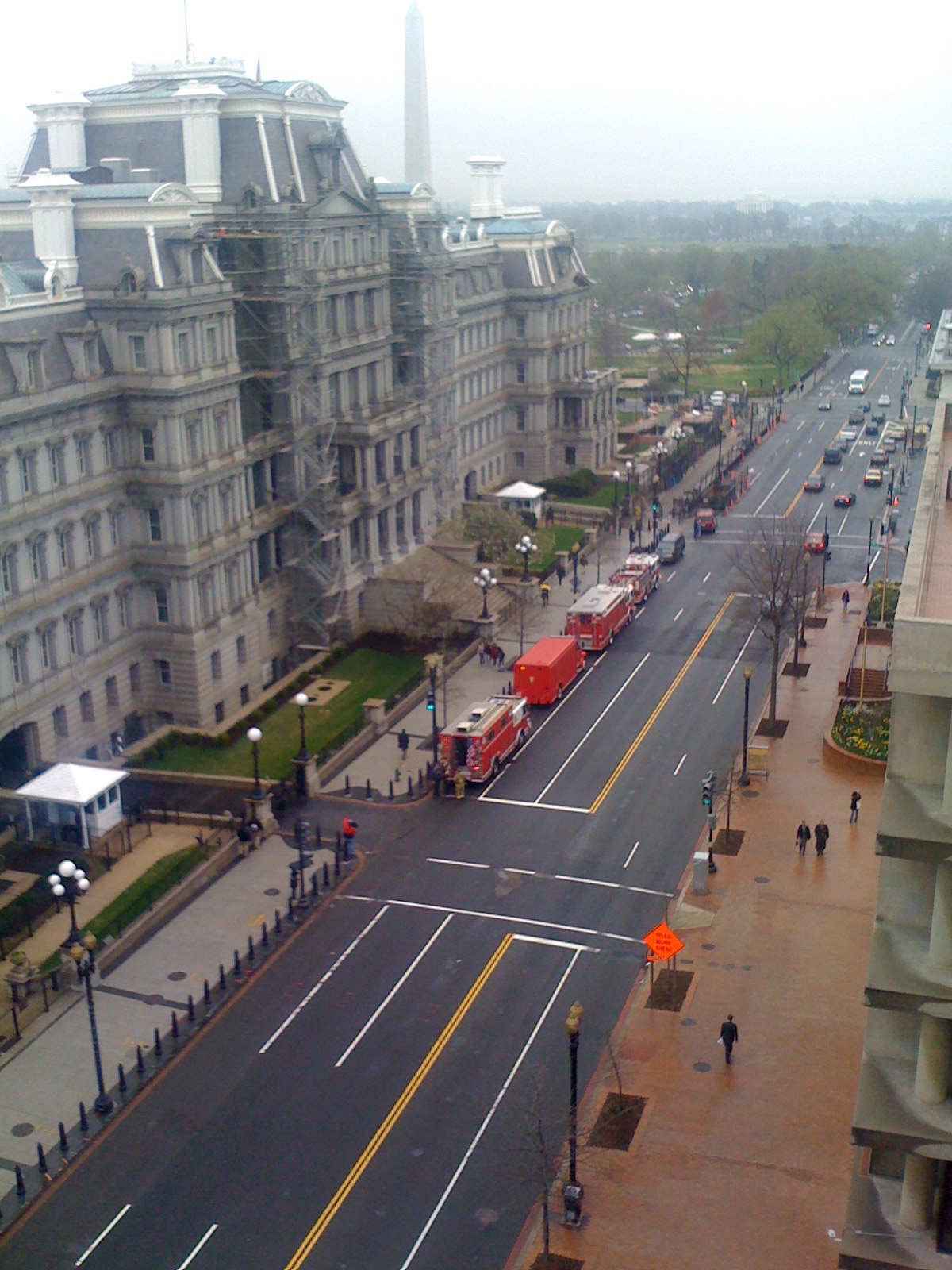 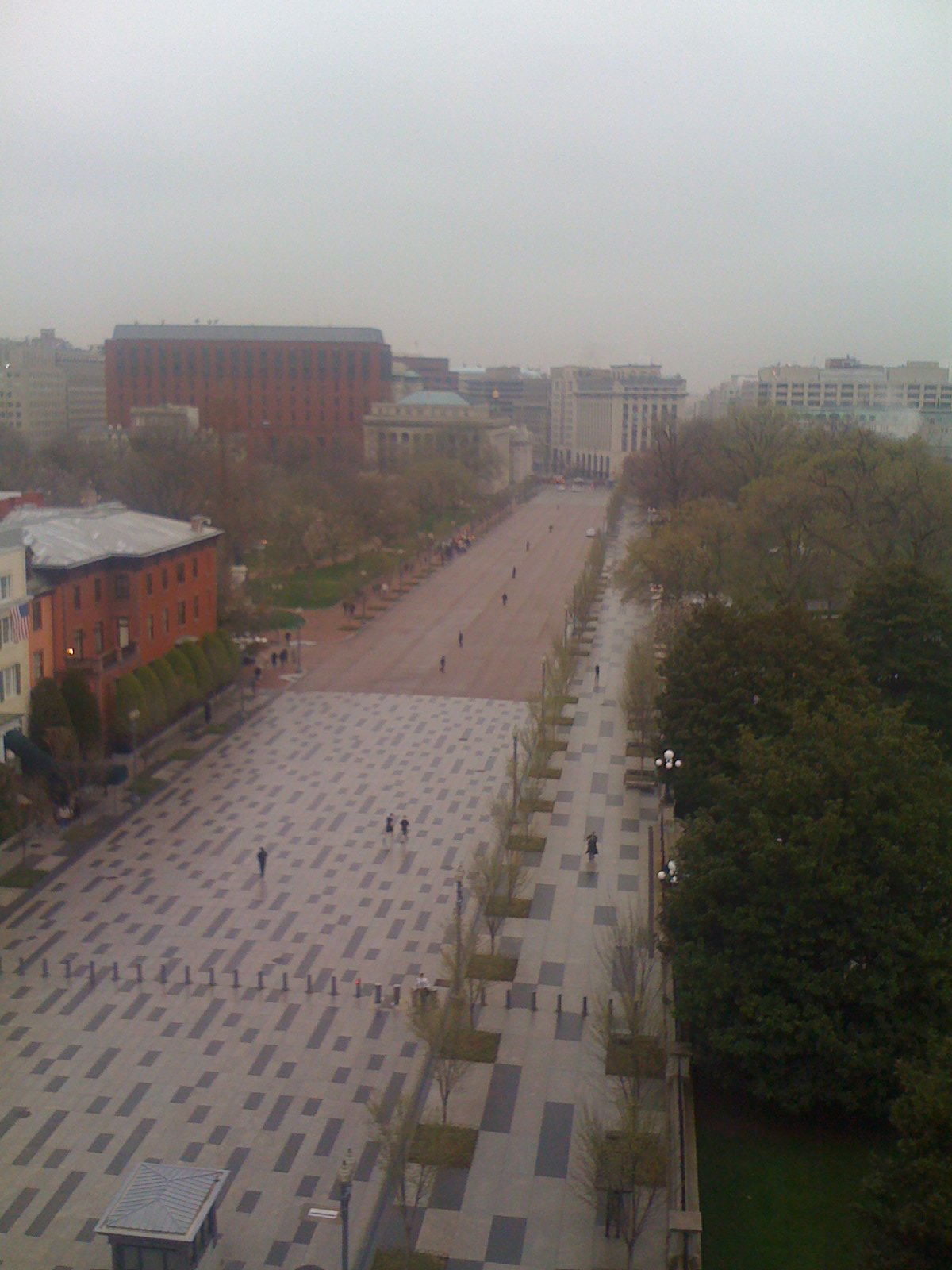 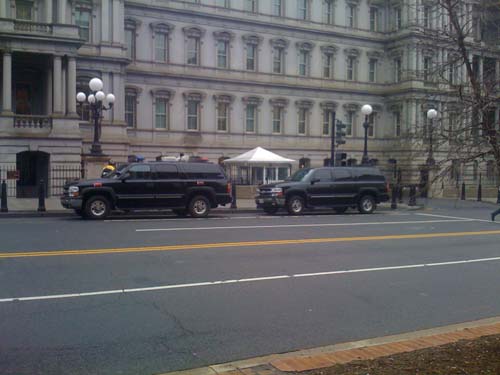 Tom McVay, a tester for the U.S. Anti-Doping Agency, told a jury in U.S. District Court in San Francisco that on March 14, 2002, he was assigned to locate Thomas at the Olympic Training Center in Chula Vista, east of San Diego, and collect a urine sample for a steroid test. The visit was memorable, McVay said, because of Thomas’ appearance when she answered his knock on her apartment door.“It appeared to be like shaving cream on the left side of her face around her ear,” he said.

I don’t normally like over the top parodies of folks, but this was a pretty funny video interview of Gov. Richardson and Obama.

To have accepted Obama’s smooth apologetics is to have lowered one’s own pre-existing standards for what might constitute a post-racial or a post-racist future. It is to have put that quite sober and realistic hope, meanwhile, into untrustworthy and unscrupulous hands. And it is to have done this, furthermore, in the service of blind faith. Mark my words: This disappointment is only the first of many that are still to come. The whole article is an interesting read.]]>

When the law first passed, I said that each pilot has to train with a ‘hostage’ that was a small ‘dummy’ of a child or something being held by the terrorist. The pilot first had to shoot the hostage, then shoot the terrorist before they would get permission to have a gun on a plane.

Basically, having pilots that are armed (and preoccupied with flying) ensures that there is at least one firearm on the plane that can be obtained by a bad guy, either by slowing killing all the passengers to taunt the pilots or overpowering the crew. Most pilots I’ve talked to have said ‘we don’t need a gun–we’ll just put the plane in a dive and you’ll see the terrorists on the ceiling pretty battered and bruised.”

according to a new study.

Common game theory has held that punishment makes two equals cooperate. But when people compete in repeated games, punishment fails to deliver, said study author Martin Nowak. He is director of the evolutionary dynamics lab at Harvard where the study was conducted. “On the individual level, we find that those who use punishments are the losers,” Nowak said his experiments found. ]]>

Washington Post. A few weeks ago a ship was halted about a mile from our county with a ‘no sail’ order as the crew was all drunk. The Maryland Pilots who were guiding the ship out of Baltimore called for backup and lo and behold, it came from the Special Operations units of the Calvert County Sheriff’s office. Apparently the local SWAT team here is one of two in the country specially-trained for Maritime interdiction. Never knew we had this level of a SWAT team around here. Guess it makes sense with a nuclear power plant and LPG gas / storage facility on the water.

After the Maryland captains left the ship, the Coast Guard called on Calvert’s Special Operations Team, which is trained to work with the Coast Guard in such situations. The team several years ago became the second such outfit in the country trained by Navy Seals in “Special Waterborne Operations,” according to the Sheriff’s Office. The team also handles security matters linked to the Calvert Cliffs Nuclear Power Plant and the Dominion Cove Point liquefied natural gas facility, the Sheriff’s Office said.

Also on March 10, sheriff’s officers boarded their patrol vessel Spec Ops II and met Coast Guard personnel in the Patuxent River, the Sheriff’s Office said. About 9:30 p.m., 11 sheriff’s officers pulled up alongside the Ocean Victory, climbed up a long ladder and went aboard. Their posture was somewhere between full-on SWAT raid and casual entrance, said Thomas, the team’s commander.

Just posted this on Doc Searls blog. This is a complaint of many, the pre-1994 dearth of materials on the web. It’s such a shame because so much of that information is already out there, just locked behind stupid walls and not properly indexed.

Another growing problem is the reordering of Google to reflect ‘new content first’. For example, I was doing some research on President Clinton’s attacks on the privacy of Americans. I specifically recall when I worked on Capitol Hill saying to myself when one of these bills passed ‘if the US ever goes Orwellian it will be these bills people look back on as laying the groundwork’. Unfortunately, as we have moved more and more toward the always observed society, I wanted to do some research back to that anecdote from pre-1994 and did some Google searching. Not only was there a lack of information about the bill that passed, but new stories about Hillary Clinton and her views on the Patriot Act / privacy / security etc. took the first 10 pages or so of Google more or less. You know one place to start in cataloging the old stuff would be the ‘morgues’ of dead newspapers. For example, the ‘morgue’ of the Washington Star newspaper sits in dusty file cabinet after file cabinet in the MLK Public Library in downtown DC.

<![CDATA[ <p>My bracket is not entirely out of it, but boy is flipping a coin not exactly the best idea. Since you can generally pick the winners of the first round of March Madness, maybe next year I’ll only flip a coin in round 2. Though I did get Western Kentucky advancing all the way to the Elite 8 which has worked out well as they seem to be on a roll.