Ok, I’ve been playing a lot with Youtube with the boy, and one of his our favorites is to watch all the fire trucks come out of the station in a flurry of lights, noise and excitement. ”Doors Open–Fire Truck Go” is now my son’s favorite sentence.

In watching these videos, I’ve come across some pretty interesting fire alarms. Gone are the days of a simple bell calling the firemen down the brass pole. No, it’s high tech. Here are a few examples (I actually turned the London one into my ringtone).

And of course, the call out for Squad 51 of Emergency!

This is a common example for mysql limits. I think it is even in the official documentation (which is repeated all over the net).

This gives a user a chance to think backward, apply a little math if the direct explanation is not present. Sometimes the guys who write these manuals aren’t thinking like a person who actually needs the manual for help.

Ok, I love Hong Kong cop films, so it probably helps. I’m also able to sort out Asian faces better than most idiots who just say ‘they all look alike’, which definitely helped because this movie is part Hong Kong police fare part Buddhist personality play. I also love Johnnie To movies so watching this was quite a treat.

The Mad Detective is a Hong Kong police officer blessed/cursed with the ability to see a criminal (or anyone’s) inner personality. In doing so he basically go insane and drops out of the force, until called back to help in the disappearance of a Hong Kong police officer and his gun (a cop losing his gun in HK is a very big deal). As he looks at possible suspects and partners, he ’sees’ (and you see) the personality inside–be it the stern taskmasker, the lazy loaf, the thug, or the brains (always played by smartly dressed hot women I should add). For those easily distracted in movies, this will throw them for an absolute loop, but once you make this realization that each time you are looking at someone they can be someone else the film takes on this really interesting dimension.

This is one of the tightest written Hong Kong cop movies I’ve seen in a long time. No random characters or scenes that obviously suffered from excessive editing (i.e. no continuity in the plot). The film has been released on DVD by Blockbusters as part of their new move into foreign films.

Like I said, if you can track multiple characters (personalities) this is really a pretty entertaining film. Definitely kept me interested as the plot twisted and turned making you feel like a lost child at times. 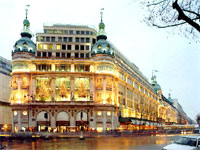 <![CDATA[ <p>23 days with the Mac Genius and it was solved by a random event.

Turns out the fan on the video card was not spinning. The card was ‘working’ when it ran through the hardware checks, but apparently that doesn’t check to see if the fan is spinning or not. The card overheated and the system shutdown.

The guys had the machine open and just noticed it wasn’t spinning. Sometimes a quick look is better than an extensive diagnostic.