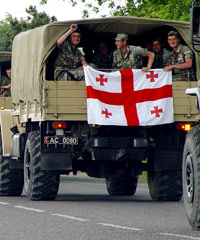 Well all pretense of negotiated settlements and cease fires has seem to go out the windows.

Georgian troops and South Ossetian forces have engaged in some pretty heavy shelling today that’s left at least 10 Georgian troops dead. The BBC is also reporting that fighters from around the region are gearing up for battle and heading to the scene:

Moscow-based Interfax news agency quoted the head of Russia’s province of North Ossetia, Taimuraz Mamsurov, as saying: “Hundreds of volunteers from North Ossetia are on their way to South Ossetia. We cannot stop them or prevent them from going.”

It also quoted Sergei Bagapsh, the head of Georgia’s other breakaway province of Abkhazia, as saying: “About 1,000 Abkhaz volunteers are leaving for South Ossetia.”

Tskhinvali, the capital of South Ossetia, is under attack from many sides, according to published reports.

The London Telegraph is going so far as to call this a full scale invasion by Georgian forces, including photos of troops on the move.