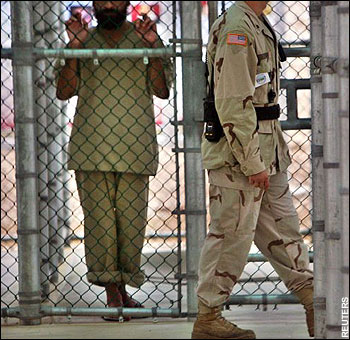 Ok, so what’s the point?

They had a trial, he was found guilty, but now the Pentagon is saying even after he serves his ‘debt to society’ he will considered an enemy combatant and sent to some place like Guantanamo indefinitely.

Pentagon spokesman Bryan Whitman said after the verdict Wednesday that Hamdan was now a “convicted war criminal” and that he was “no longer considered an enemy combatant.”

But on Thursday, Whitman said Hamdan’s status would revert to “enemy combatant” when his sentence is completed.