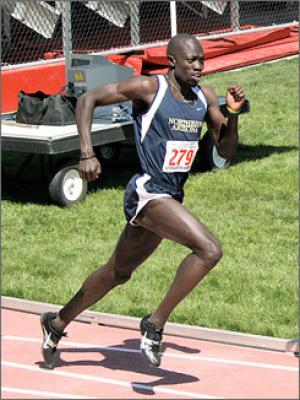 Lopez Lomong, a former child prisoner-of-war in Sudan and recently naturalized US citizen will have the honor of carrying the US flag into the Birds’ nest stadium in Beijing on Friday. Lomong is running in the 1,500 meters and was given that honor after a vote by all of the US Olympic team captains. He was kidnapped as a boy during a stupid civil war and spent 10 years in a Kenyan prison camp before coming to the US in 2001. Here’s a nice piece on his naturalization ceremony.

“The American flag means everything in my life – everything that describes me, coming from another country and going through all of the stages that I have to become a U.S. citizen,” Lomong said. “This is another amazing step for me in celebrating being an American. Seeing my fellow Americans coming behind me (in the Opening Ceremony) and supporting me will be a great honor – the highest honor. It’s just a happy day. I don’t even have the words to describe how happy I am.”

And in case you are wondering, here is the previous list