<![CDATA[I gave up Diet Coke and it sucked, but I'm still doing it. <img loading="lazy" style="margin: 10px;" alt="Diet-Coke" width="215" height="300" data-src="https://penguinsix.com/wp-content/uploads/2013/10/Diet-Coke-215x300.png" class="size-medium wp-image-4533 alignright lazyload" src="data:image/gif;base64,R0lGODlhAQABAAAAACH5BAEKAAEALAAAAAABAAEAAAICTAEAOw==" /> Six months ago and a few days more or less, I decided to go cold turkey on Diet Coke. I was easily 3-4 cans a day, and when you factor in a drink or two or three at a restaurant or pub, I was probably consuming 60-80 ozs (1175ml-2365ml) a day. There are plenty of horror stories about diet drinks, but since most of them come from hyperbole-spewing hippies I generally ignore them. I’ve always preferred the science-based medicine approach to many things about health, and reading about “the corporate conspiracy” to put evil “high fructose corn syrup” in my drink just turns me off. Skeptics have attacked some of the studies here and here if you want more on the HFCS myths. However, for me dumping diet soda was more of a behavioral thing than health. About 15 years ago, I decided as a New Years Resolution that I would give up french fries for one year. I did it (I’m very stubborn) despite eating fries quite a bit the year before and the year after. What I noticed wasn’t so much that I lost weight, but that not eating french fries was changing my overall diet choices. If I couldn’t have “fries with that”, I wasn’t ordering “that”–my trips to McDonalds decreased simply because I wasn’t having one of the three main items in burger-fries-Coke. I wondered if giving up Diet Coke would have a similar effect.  What was the immediate impact of going cold turkey on Diet Coke? I gained about 10 pounds. Switching from Diet Coke to things like fresh-squeezed lemonade or orange juice increased the number of calories I was consuming quite a bit. I like my drinks to have a bit of a ‘kick’ to them and switching from Diet Coke to water instantly just wasn’t cutting it. I wanted some sort of taste as I ate some food. When I stepped on the scale and it reached 208 lbs. Given my height, that worked out to a Body Mass Index of about 29.9 (with 30 being the official definition of ‘obese’). I decided it was time for a bigger change. 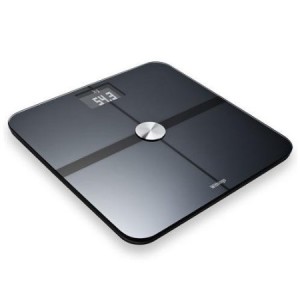 First up was a new scale. My old scale varied wildly and I was relying on my memory of “I think I weighed that last week”. No, this is the Internet age. I needed an Internet scale, so I bought the Withings WS-50 Smart Body Analyzer.  It’s pretty awesome. It records my weight to my iPhone and to a website everytime I step on the scale. It also does an estimate of the percentage of body fat, heartbeat and even the ambient CO2 quality in the room (to help improve sleeping). What it did for me was start to identify “trends” rather than just “weights”. As I’ve learned, your body weight changes a few pounds even in the matter of a single day. For me I was always one weight at bedtime and then about 1-2 lbs less when I woke in the morning. Seeing this as a trend over many days became far easier for me to understand. In fact, having these data points and record were really essential to this whole effort. Knowing what I weighed and the effect of splurging or going on vacation to the USA (and eating crap for a few weeks) was something that I could visually see every single day and week as it was spelled out in a nice graph and tabular data. It almost became a bit of a game seeing how much I weighed and how much I had lost. The second portion of my change came with my diet, and this was a big effort indeed. I’ve used the calorie counting app LoseIt when it first came out to the iPhone. I was pretty good at calorie counting for a few months, but then came a new iPhone upgrade and I lost all my old data, thus deciding ‘screw this–back to McDonalds’. I decided to give LoseIt another chance and it has certainly grown with many new features and capabilities. I was also able to connect my Withings scale to Loseit’s reporting system, which made tracking even easier. At first my diet was basically about getting under the recommended calories. Originally I just would eat less, even skipping a meal, but most diet advice advises against anything too dramatic. Slowly I came around to greater portion control and some dietary changes. 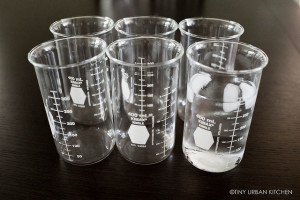 Helping me in this quest were some laboratory beakers now serving double-duty as glasses in my kitchen. I bought some 400ml and 250ml beakers from a laboratory supply company and now use those as glasses, able to accurately pour out an exact measurement of a drink everytime. Since most of the nutrition information in Hong Kong for liquids is based around 100ml (3.3 fl oz) that sort of became a unit in my mind of what I could and could not drink. Prior to the diet, I was drinking 300ml (9-10fl oz) of Orange Juice every morning. But this soon became half that size and I realized “I really don’t need that much to drink”. I also made the switch to water. I hate drinking water. I mean, it’s just plain boring. Added to this was the cultural preference here for ‘room temperature’ water or even hot water, both of which I find basically disgusting. With our tiny fridge in our standard Hong Kong apartment, finding room for a few bottles of water turned into a bit of a battle, but eventually I was able to reclaim some space in there and now keep four or five bottles cold and ready throughout the day (I’ve had two already this morning). I also began to “visualize” portions much easier. I set a mark in my bowl for what was 1 cup of Cheerios for example. I used this great visual food guide to start to understand “how much” food I was actually eating when I sat down. When you can “see” the portion size it makes dieting far easier than trying to measure out everything each time. With this came some other changes. I started to realize that some items were more calories (quite a bit more) than others. For example, a tin of pineapples was a simply and quick snack, but if I got them “in syrup” I’d be consuming quite a few more calories than if I bought them “in juice”. Salad dressing was another killer. The regular stuff was five or six times the calories as a “fat free” variety, which, despite the horrific taste, became my new regular option. I also started experimenting with a few things that I’ve been told are good (i.e. fish) but which were always way down on my shopping list behind things I liked quite a bit better. I didn’t necessarily change what I was eating. I still have an occasional treat of some chips or pretzels in the evening, and I even have a Cadbury bar in the kitchen. But whereas before I would eat an entire 250 calorie Cadbury Milk Chocolate in one go, now I might eat 1/8th of that as a square, once every couple of a days just as a treat (38 calories or so). I also rediscovered foods from my youth, namely apples, oranges and grapes. Of course I’ve been eating them for years, but now that I have more a diet focus they have become regular items, even daily items. Again, there was a cultural shift required in my house. I grew up with fruits being stored in the fridge which made them both cold and extended their freshness, but the norm here is to keep them on the counter, room temperature, which doesn’t quite have the same ‘zing’ to it when you take a bite. After clearing some space in the fridge I now have a collection of fruits for snacks. Third, exercise. The third big change has been a recent development, but one that was necessary. We have a fully-kitted out work room in the building with treadmills, weight machines, stair climbers and an exercise bike. I’ve generally avoided it as much as possible, but now I make it a point to do an hour on the exercise bike every day. At first it was a painfully dreary experience, basically like watching a clock move as I saw the minutes countdown and the calories burned calculator move up, but that all I changed when I brought down my iPhone and iPad to keep me company. Now I had plenty of movies and TV shows to catch up on while exercising, and the time spent downstairs has flown by. I’ve watched all the episodes of Broadchurch, Quatermass, a couple seasons of Top Gear and even a few movies I’ve been remiss in seeing such as the Indian blockbuster “Three Idiots”. The latter was particularly good as when you are focusing on subtitles you don’t pay as much attention to the clock. 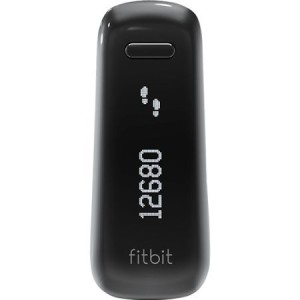 So a little musical number that really goes well with the title of this post. “I Just Spent Six Months Without Diet Coke.” Sing along.  ]]>

3 thoughts on “I just spent six months without Diet Coke: a geek on a diet.(UPDATED)”