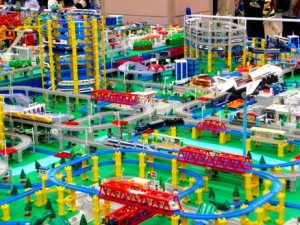 I couldn’t think of a better translation, but you get the general idea from above what’s going on here. On Youtube, where you can find just about anything, there are quite a few guys in Japan who have filmed incredibly complex train crashes involving toy PLARAIL trains.  These are plastic battery-powered Japanese toy trains that zip around on blue Tomica track, of which there is quite an abundance in my own home.  These Otaku train guys film massive competitions between various train types across multiple track layouts to determine once and for all who is the strongest. My kids are hooked. There are literally hundreds of these videos.  My boys watch them over and over again to the point they know which trains will succeed and which will fail, and more complicated, which track layouts we should attempt to duplicate here in the house.  “No daddy, build the one with six bridges and four crossing points” (and by the way, my son says ‘points’ instead of ‘switches’–darn British-based education system over here). ]]>