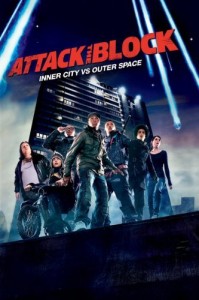 [/caption] Ok, I’ll be honest, the first time I watched this movie I got about 20 minutes into it and I turned it off. Why?  Perhaps it was the rioting in London that was taking place, and the fact you can easily picture all the lead characters actively stealing TVs or looting police cars.  Or maybe it was the hip-hop meets Jamaican South London accents and slang required not only the captions to be on but a couple of hits to urban dictionary just to follow the plot (see my Attack the Block slang dictionary).  It might also have been the fact the film was billed as a horror movie, and basically I hate what has become of horror movies (torture porn and vivisection documentaries).  But eventually my own stubbornness forced me to come back to the movie and finished what I started.  I watch the whole movie from beginning to the end (88 minutes later). And then I did it again. And again. Wow. Thank god I went back to this film.  This was a lot of fun!  It was a refreshing look at a tired genre (alien invasion) done with just enough comedy to keep me laughing when I wasn’t looking down at my shoes (to avoid a few bloody scenes). Attack the Block

tells the story of an alien who lands in a South London tower “block” public housing unit.  It falls into the middle of a mugging by a gang of youth led by the aptly named Moses (John Boyega — more on him in a moment).  After killing the initial alien, they take the corpse back to the local drug dealer’s “weed room” where they meet Ron (Nick Frost) the resident horticulturist and Nature Channel afficiando.  They also meet up with the drug kingpin guarding his stash who allows the boys to store the corpse in the “Fort Knox” growing facility because of the chance to make some money selling it to the tabloids.  But before they can contact The Sun, more aliens fall to earth, prompting the boys to run out to bash a few more skulls.  Unfortunately, these new aliens are not like the Gollum-like alien they first encounter, but are, in the apt and t-shirt ready words of the youths, “big alien gorilla wolf motherfuckers”.  The rest of the movie has them fighting their way back to the block where they can engineer a battle with the alien horde. [caption id="attachment_3645" align="aligncenter" width="640" caption="Who you gonna call?"]

[/caption] The film is being praised as not only a reinvention of the alien invasion flick (after Independence Day to the worn out Battle Los Angeles) but also as a social commentary, with the youths spurting out lines that betray far more knowledge than you would expect from your local street urchins.  The language is fresh from the street (though you will need some translation) and the story is as much comedy as it is sci-fi adventure tale.  The acting was very strong, with Nick Frost, the only guy you’ve ever seen before, playing a supporting role behind the cast of new faces.  From a film perspective, I was having a bit of fun identifying “scenes” here and there. The directors really studied their movie history and this is not just some slap dash filming going on but some real ‘sets’ that were carefully staged with good cinematography in mind. As for the monsters, the big alien gorilla wolf motherfuckers, well they are just cool.  Yea, it’s almost low budget in how minimalist they are, but they’re scary, they’re mean, and well, they look like big alien gorilla wolf mofos.  I’m surprised I didn’t see more of these at Halloween, but expect next year they’ll be out in force.  I also expect to see them in a sequel, and god a video game would be so awesome.

The film is rated R for language and for a few bloody scenes, but the squeamish can turn their heads away before these three incidents (the police in the van, the parking lot, and in the smoke filled hallway).  This film is headed for cult status and excels at the take of a alien invasion from a personal standpoint (boringly done in War of the Worlds and Cloverfeld). I really enjoyed it.  Perhaps it was because I was expecting so little that I found the surprise to be so memorable.  The acting by the lead John Boyega as a solemn but mentoring street leader has caught the attention of Spike Lee, who has already cast him in a new movie about Mike Tyson.  Expect to see Boyega’s name for many years to come if he can repeat the believability he did in this role.  Definitely worth a look. p.s. the trailer doesn’t do the movie justice.     UPDATE:  Oh yea, the soundtrack was also pretty good too.  A mix of reggae and some new sounds from Basement Jaxx, et al.
]]>

One thought on “Attack the Block movie review – from turning it off to cult classic in just a few steps.”