<![CDATA[Ok, let's be honest--when I saw the preview of a 30-foot stone Samurai carrying a gatling gun doing battle in a temple with a waif-thin blonde girl in a mini skirt armed with a sword, I, along with every 12-year-old kid who has ever played a video game, was basically on board to see this flick. <a href="https://penguinsix.com/wp-content/uploads/2011/03/600px-SP_07.jpg">

So when I read the mountain of reviews that have come out that “cleverly” used the title “Sucker Punch Sucked” (wow, what an amazing play on words there–not) I wasn’t too dissuaded. I wasn’t going to this film for the plot, character development or to reach some epiphany about the meaning of life, as were many of the mainstream commentators who have really trashed this film.  I was going for the action. 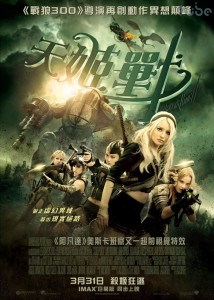 But before I talk about that, let me do a brief synopsis of what amounted to a plot.  Sucker Punch is the story of a young girl named ‘Baby Doll’ thrown into a corrupt mental institution who ‘escapes’ from an upcoming lobotomy by delving into a world of make-believe. She finds herself living ‘trapped’ in a bordello filled with other young women working as dancers and prostitutes, conveniently dressed as extras from Moulon Rouge. When Baby Doll is dancing she casts all that watch into a mesmerized trance, at which time Baby Doll and her friends fall into yet another land of make-believe in the video game world on giant gatling-gun toting Samurai, steam-powered Kaiser soldiers from World War I, the set of Lord of the Rings & Harry Potter and the Goblet of Fire, or a hover train from the film Total Recall. Each video game sequence corresponds with a ‘bordello-world’ sequence in which they are obtaining a necessary parts for their escape. Ok, so basically describing the plot there was a lot like writing down the plot of a porn movie. Kind of irrelevant. For me, this film was always about the action and special effects sequences and the rest of the movie was just cinematic detritus necessary to fill in the allotted time. The special effects sequences were awesome. No denying. In fact, the four combat scenes were both amazing to watch and almost comical in that they hit on every ‘hot button’ thing a 12-year-old desires in a video game. a) Hot chicks in leather mini skirt b) armed with short-barreled M-4 Carbines and HK MP-5s battling against c) steampunk World War I soldiers with d) airplanes and giant blimps in the air, oh, and e) a walking robot Bunny rabbit Gundam/ ‘mech’ robot firing a gatling gun. I mean, check check check check.

The film is shot in a ‘washed out’ effect in which various shades of grey and black seem highlighted and most other colors neutered. It’s fitting to the storyline of a dark 1950s mental institution, but toward the end I was starting to feel a bit grey myself. As I mentioned the general story of escape that fitted between the action sequences started to get a tad boring. I didn’t care at all if they escaped, triumphed, found the meaning of life or whatever. I didn’t come for the story or any of that, so toward the end of the film where they are tying up those loose ends I started to feel a bit down. The action sequence sugar highs started to crash and I bemoaned the lack of any more crazy scenes to come. For some of my friends attending the films, the short sugar highs were enough. They agreed that the general story was nothing but a delivery device for the wild combat scenes and beautiful women, and the action sequences were enough to give it a big thumbs up. For me the action scenes are simply the eye candy of this film that provided enough of a meal to get me through the two hours.  It was like watching some kung fu movies. You don’t really care about the story as that is just used to tie together the fight sequences.  For example, Fist of Legend is an amazing movie but honestly I skip everything that is not a battle. I’m sure others do something similar with porn movies that try to introduce a plot or character development. Speaking of porn this really wasn’t an overly sexual movie. Yes, they were wearing mini-skirts and tight fitting clothes pretty much the whole time, but they really didn’t emphasize the sexuality overly. Many video games and mass market magazines like Maxim or FHM are more revealing than this film. There weren’t many close up cleavage shots and apparently several sequences in which the lead characters did their respective sexy dance routines were stripped from the film (but will make it out on the DVD). In fact a very overtly sexual scene was censored to ensure a PG-13 rating in the US. In the end I also started to wonder about the purpose of this film. We now live in a media world in which some video games outstrip the revenues of major motion pictures. Call of Duty Modern Warfare generated $550 million in revenue in just a weekend and the whole genre has generated over $3 billion in revenue. If you think of it this way, imagine a video game of Sucker Punch, with the characters and even more action sequences. Now imagine this film as just a commercial for the game? I can. In fact I wondered if this flick was released on YouTube only as a teaser for the game if the critics would have been kinder and the buzz greater. Many movies are really just plugs for a series of toys or other assorted items (ever ask WTF was an Ewok?). Sucker Punch could have been a movie released just to introduce a whole new line of video games, instead of say Final Fantasy or Lara Croft, which were films made after the games. In a sense I think the business opportunity might have been lost here to bring out a new line of games and characters. In the end, if you are feeling the need to watch a pretty amazing video game for a couple of hours and eat popcorn, this is your film. If you want to talk to those in the comic book or video game industry over the next year, you also need to see this film as it will be a subject of conversation at many of their events. If you are looking to impress your friends in banking, finance, law, medicine or some other industry, probably best if you just keep your guilty little secret to yourself that you saw this film.]]>