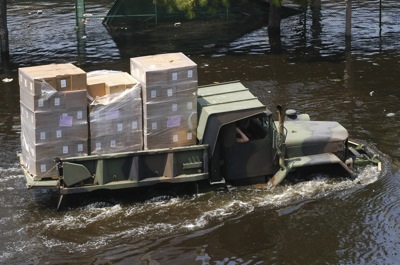 The Lousiana National Guard has been placed on alert.

Department of Homeland Security head Michael Chertoff is down in Louisiana meeting with officials in anticipations of Monday’s Hurricane Gustav hitting land somewhere near New Orleans. Officials have already declared a state of emergency and begun limited evacuations of some areas. There will be no ‘Superdome’ refuge of last resort this time, so folks are starting to hit the highways already.

The most recent Gustav track from the NHS puts it about 25-50 miles west of New Orleans, though at present it is too far out to accurately assess just where it will hit land. Anywhere from Florida to Texas is technically in the strike zone.

And if that isn’t enough for you, Hurricane Hanna is now coming toward Florida with an arrival sometime later next week.

Not a great week for the Republican convention.