As one who looks at power outage maps frequently (living in the boonies) I can really see the total pain in the ass that restoring power to Houston will be over the next few weeks (yea, weeks). Centerpoint Energy has a good outage map in PDF form here, but I’ve taken the big bit and thrown it in this post. 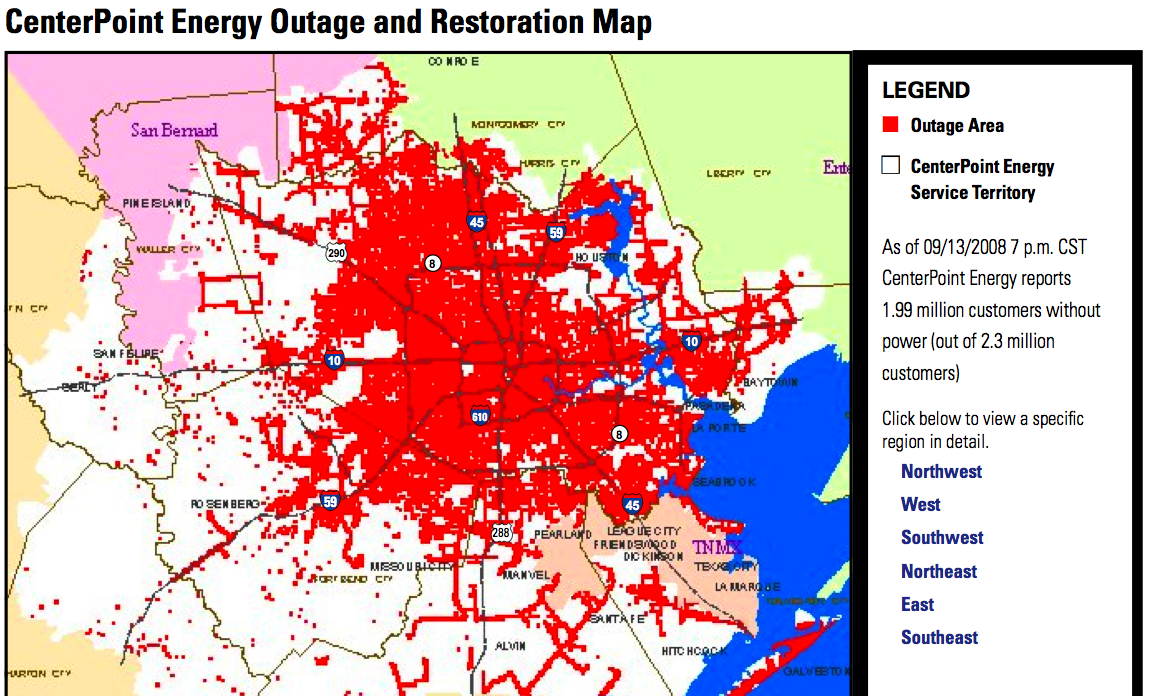 No, that's not an election map.

The Washington Post is reporting that residents of Galveston face ‘certain death‘ if they remain in their homes for Hurricane Ike. Unlike recent storms like Katrina, Ike is going to hit Galveston and Texas at full force, somewhere around Category 3 (135mph).

“This water as it comes in could be almost like a tsunami,” Dewhurst said on CNN. “Some of our computer models put the entire island of Galveston underwater.”

One worst-case scenario for hurricane planners is a giant, Category 4 or 5 storm that strikes the heavily populated Houston area, flooding Galveston Bay and driving a wall of water up the Houston Ship Channel to overwhelm port, chemical storage and water facilities, Chertoff said. Under that scenario, the homes of 200,000 or more residents could be damaged.

“It’s coming pretty close to what that nightmare is. It’s going to be somewhat south of that,” Chertoff said. “We’re talking about real impact, not only on the refineries in question but the chemical industry and a lot of the energy and chemical resources that we depend upon in this country.”

Ike is about to leave Cuba, and when it hits the waters of the Gulf of Mexico and the Hurricane hunters should be flying through it again. It should start to pick a general path that can be estimated a bit better and folks along the Texas coast may have a better idea of what they should be doing this weekend.

In case you are wondering how they come up with these forecasts, it’s based in large part on the computer models and the NHC’s own skill. They publish their discussions which make for an interesting read:

Again we still have to wait for the Cuban spin, the tilt the hurricane is going to take after it passes over pretty much the entire length of Cuba, but once it does, the NHC has the hurricane making a line for Galveston, Texas and nearby Houston.

Interesting week ahead to say the least.

Yup, what a difference a day makes.

Depending on how long Ike stays over Cuba, we’ll see a different ’spin’ out into the Gulf and final resting point somewhere along the US Gulf Coast. Originally it was Pensacola, then the possibility of New Orleans, but today’s computer models are sending it toward Texas (though without much accuracy).

I think we’ll have to wait until after Ike destroys Cuba before we know where it is heading next. As for my friends in the Turks, they weathered the storm though the winds were quite nuts.

Ike hit hard about 2am and blew steady at around 135mph straight in from the north until about 6am. Five of us worked hard trying to keep up with all the water pouring in through the big sliders. They held beautifully, but the wind was so strong and direct that it was just pouring in over the track. The eye passed south of us around 5:45 or 6. We never had a lull, but the wind shifted and is blowing hard (still over 100mph) out of the ENE. That’s given us a bit of a break and we were able to catch up on our bailing and mopping. Getting a bit of a rest now, though it’s still very ugly out there. House has performed exceptionally well with no structural strain, just water blowing in. We estimate we’ll be getting hurricane force winds until around 8:30 or 9, at which time we should drop down to TS force winds.

Really we didn’t have much of a storm. From about 10-12, there were some decent gusts and sheets of rain, but after that it barely reared it’s head again. We had a 90 minute power outage which is incredibly short for around here (we go 24 hours with just a decent thunderstorm). The waves mellowed and the bulk of the flooding was East of here (surprisingly) in the Virginia suburbs of DC.

I’ll probably dump our backup water supplies on the lawn tomorrow to help the new grass I planted. We did have a few leaks in the ceiling which we’ve been trying to track for the last couple of storms know. We think it gets windy enough that the siding gets lifted up and water pushed underneath, but we’re not sure.

Ok, it’s still early, and Ike is a mess. It’s going all different directions so don’t run out the door just yet (unless you are in South Florida). But the current curvature of Ike puts it on a direct collision course with New Orleans. However, the computer models (which you really should examine more so than the NHC estimate) still has Ike going everywhere from Pensacola to Texas.