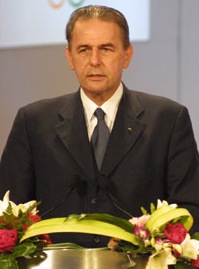 Many have wondered ‘where the hell is Jacque Rogge’ during the Olympics? His presence was noted at the opening ceremonies, but for the next 10 days he was AWOL and unspotted nearly anywhere. He managed to make an appearance the other day at the softball tournament (i.e. proving he was not detained in jail for trying to protest in China) but then quickly disappeared, only to re-emerge last night with some harsh words for 200m winner Usain Bolt:

Rogge said: “That’s not the way we perceive being a champion. I have no problem with him doing a show. I think he should show more respect for his competitors and shake hands, give a tap on the shoulder to the other ones immediately after the finish and not make gestures like the one he made in the 100m.

“I understand the joy. He might have interpreted it in another way but the way it was perceived was ‘catch me if you can’. You don’t do that. But he’ll learn. He’s still a young man.”

On the one hand, this was pretty odd. Usain Bolt has been one of the highlights of the Olympics. His ease of winning some of the most sought after titles in the games has been extraordinary. Despite knowing the final result, I myself watched last night and as he finished his turn with a five yard lead my jaw dropped and I spoke aloud ‘holy bejesus’ as I expect a number of other Americans did too. And then he sped up…

But on the other hand, as I watched his celebrations I did say to myself ‘Americans have celebrated like this at previous games and gotten raked over the goals by the British press and others for being too arrogant, too jerk-like.’ I did wonder if this had been an American winning this event and celebrating in such a manner how large the cry would have been from the European media.

As Bolt is a Jamaican and thus, not an American, he generally will get a pass for his behavior. Perhaps Jacque Rogge was on the right track last night in calling for some dignity.

2 thoughts on “Jacque Rogge is not dead. IOC President warmed out of cryo-freeze to criticize Usain Bolt”