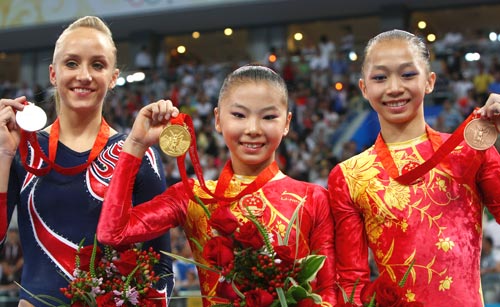 Which one still can't get a drivers license?

Faced with huge international pressure and a general sense of ‘give me a break’ the IOC has finally caved into demands and declared they will conduct an investigation into 12 14 16-year-old Chinese gymnastics star he Kexin (and any possible coverup by Chinese authorities).

An IOC official told The Times that because of “discrepancies” that have come to light about the age of He Kexin, the host nation’s darling who won gold in both team and individual events, an official inquiry has been launched that could result in the gymnast being stripped of her medals.

The investigation was triggered as a US computer expert claimed today to have uncovered Chinese government documents that he says prove she is only 14 – making her ineligible to compete in the Olympics – rather than 16, as officials in Beijing insist is her age.

Pulling up documents from ‘closed’ servers (closed after people started to notice the age discrepancy) computer security experts are displaying some of the website information that shows her age as being 14, despite what is in her passport. You can view the documents at the security experts blog.
]]>