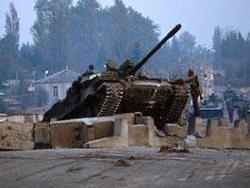 Russia continues to pour troops into South Ossetia and has reportedly stepped up the bombing of Georgia, targeting not just military locations but economic assets such as ports and pipelines. Meanwhile the world has been sending ambassadors and whatnot demanding that Russia pullback, but the Russian government is starting to ask the big question–why?

Russia will win militarily, through sheer numbers if not military ability. While it may be a much longer fight than just this weekend (despite what Russian bloggers think) the overall political climate in Russia is now asking the question ‘maybe we should redraw the maps.’

With a veto at the UN, don’t expect ‘blue helmets’ to be replacing the Russian ‘peacekeepers’ in South Ossetia anytime soon. Putin is calling the Georgian attack ‘Genocide’ which is a pretty loaded word designed to stir up a range of emotions around the world, though many around the world take everything Putin says with a grain of salt. It’s pretty clear that most of the world isn’t going to be rushing to the Russian side on this matter, but it’s also pretty clear that that doesn’t really matter.

What happens next is anyones guess. Militarily we could see guerilla-like fighting for years. Economically it’s unlikely we’ll see any sort of sanctions or anything more than a slap on the wrist (i.e. visa troubles for Russian leaders, etc). Russia might find itself kicked out of the G-8 regardless of who wins the American presidential election in a few months, but it’s doubtful many Russians would really care.

How much of a ‘resurgence’ in the Russian military is ‘real’ (readiness / training / resupply) and how much was for ’show’ (i.e. long range bomber flights of little significant value) over the last few years of Putin’s tenure will soon become apparent. Should the Roki tunnel (where South Ossetia gets much of its money) be blown up by some errant missile, resupply of Russian forces would become a bit more difficult.

We’ll see what happens next.

p.s. for additional updates from the Russian point of view you can use TASS’s English language website. It is updated more frequently than Russia Today’s website. For the Georgian side you can check the Civil.ge website.

* Head of the Russian 58th Army injured in attack.