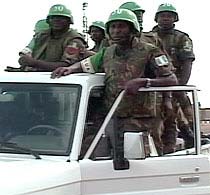 Sudan reacted with anger today to the International Criminal Court’s indictment for war crimes in the Dafur region. Sudan promised to turn Darfur “into a graveyard” after President al-Bashir was accused of genocide, crimes against humanity and war crimes. In addition, the UN also withdrew nonessential staff, and international peacekeepers were put on high alert, in anticipation of reprisals from government-run militias.

“Man developed in Africa. He has not continued to do so there.”–PJ O’Rourke.