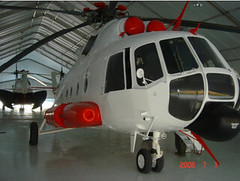 This is the MI-17 helicopter used in the Ingrid Betancourt rescue operation. I found these photos deep in a Colombia military document that was released as part of the coverage of Operation Jaque. The paint looks pretty new. It’s a good thing FARC rebels aren’t that aware of aircraft up close, or they might have realized something odd was up. These don’t look like helicopters that have been flying around in the jungle filled with bugs and whatnot. ]]>