<![CDATA[Christmas this year had many of the usual suspects under the tree.  Soccer ball, LEGO Ninjago, some dominoes (my son wanted them), an Arsenal lunchbox &amp; calendar &amp; playing cards &amp; jersey, and for the big ticket item this year a Scalextrix set that we've only played with a couple of times since Christmas (the kids are still a bit young and dad doesn't want the cars to keep breaking, despite their immense joy whenever they crash together). [caption id="attachment_4446" align="alignright" width="150"]<a href="https://penguinsix.com/wp-content/uploads/2013/01/IMG_0239.jpg"> 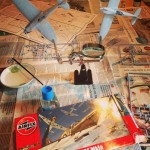 Let it dry before you paint it.[/caption] One other addition, unrequested, under the tree was an AirFix Spitfire.  My oldest is now six and I can remember that when I was six I got some models too (I had the Apollo-Soyuez Space Capsule model for my sixth birthday, and no I don’t remember it–I just saw the photograph in an album). My kids hadn’t a clue what an Airfix was. When I opened it they were both a bit bummed that it wasn’t already completed and ready to play with.  “You mean we have to build it?”  Clearly their iPad-affected attention span was going to have some difficulty with this one. But for me, this was a chance at redemption.  I’ve built dozens of model planes in my day, and never, not once, has the thing I made look anything even remotely like the picture on the box. I simply didn’t have the skills to make it look anything like an official plane.  But now with my kids–that would change.  We’d take the time, do it right. I even took out my ‘third hand’ tool from my electronics shop to hold the planes and let the glue dry without my fingerprints working their way into the plastic (as it did so many times before). I bought the officially color-schemed paint, more or less, and special brushes.  I even bought some paint thinner (interesting side note–it came in an empty beer bottle–it’s a Hong Kong thing). The instructions had about 35 pieces or so and 35 steps.  By step 5 I knew this just wasn’t going to work. [caption id="attachment_4448" align="alignleft" width="150"] 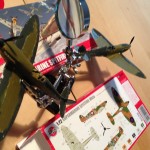 Not exactly RAF Specification Paint[/caption] The youngest was already bored and the oldest was doing his best to feign interest.  We got the little pilot into his seat and let it dry while we started working on the fuselage, but by the time we got to the wings the youngest was on the floor playing with his LEGOs and the oldest was berating me with “what’s it do?  what’s it do?” to which my answer of “nothing” didn’t quite satisfy him. I eventually got the planes done and let the glue dry for a few hours before uncracking the paint.  This is where the kids were a bit more excited.  I guess the fact that they could see the results of what they were doing, i.e. colors on the plane, meant they were far more interested in doing it.  They started with the green and began slopping it on the models (slopping is the only proper word).  I was a bit annoyed as I realized that these planes would soon look like my airplanes when I was six years old. But then I figured it out–they’re supposed to look that way. It’s supposed to look like a six year old did it. They are supposed to have fun in the process of building it and, if they even care, feel a bit annoyed that it doesn’t look like the box when done. That’s how they learn, that’s how they strive to get better. So I quickly gave up on trying to match the specific ‘blotches’ of camouflage on the wings.  Son #2 decided that the entire plane should be brown and son #1 was just doing ‘the outside bits’ in green.  When finished, it looked like a mess, but the boys were both extremely happy with them.  Son #2 even decided to add a bit of Glitter Glue to his “so it would be easier to see in the sky”.  The planes now hang over their beds, awaiting the other members of the squadron that will come later in life. Sometimes letting them do something ‘wrong’ is the best way to get it ‘right’ I guess. [caption id="attachment_4447" align="aligncenter" width="225"] 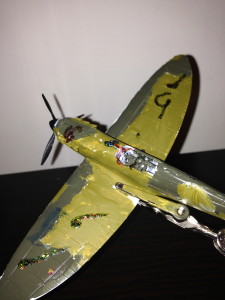