<![CDATA[It doesn't take much to move a crowd, and in crowded Hong Kong even the whiff of something can stir a rush of panic. Take for example salt. Some salt contains iodine to help<a href="http://en.wikipedia.org/wiki/Iodised_salt"> prevent against iodine deficiency.    It’s been this way for nearly a century and most people (save for the conspiracy theorists) don’t really notice it.  In fact in some countries it is a requirement that all salt sold be iodized. But iodine is also part of Potassium Iodide (KI) which is a frequent pill given in nuclear emergency situations.  The US has stockpiles of it surrounding most nuclear reactors, and sales of this have gone through the roof throughout Asia given the current situation in Japan. However, to get the necessary dose of iodide from common iodized table salt requires some mass quantities of salt.  How much?  According to this, nearly 1,550 grams PER DAY to get the equivilent of one 130mg KI tablet. That would kill you. Or, to be more visual, take a look at this little picture I made.

Nonetheless, reports are coming in from all over Hong Kong and China of runs on salt.  I couldn’t really believe it so I ran down to my local grocery and…viola. Guess which shelf was the salt shelf? 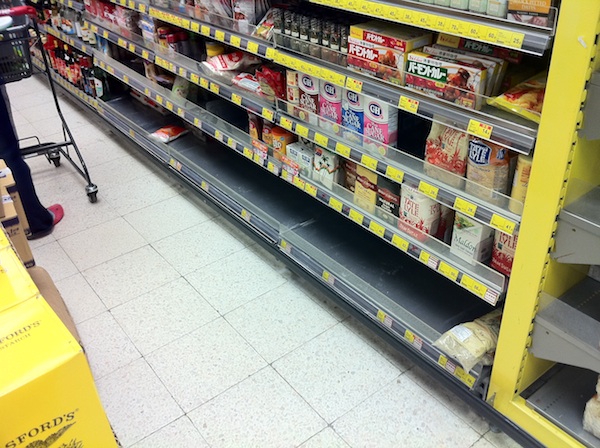