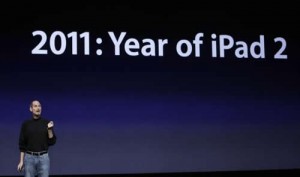 I sent out an email the other day about the very important piece that ran in Engadget following the iPad 2 launch. This article really recognized the seminal shift that is underway in technology as it relates to tablets, and correctly identified that the new arguments for which machine to buy or not buy will be based not so much on silly specifications but on overall user experience. I sent this to some friends and one replied asking about whether to buy an iPad or a Kindle for their kid. Because I was up in the middle of the night I actually took some time to write a pretty detailed response. Hi, I was thinking of a line from the movie Contact earlier today for some reason, and now that I see your email I guess I must be psychic. In the film, Jodie Foster is basically an astronaut put into a space ship to travel through time and space and hang with some aliens. She’s handed a cyanide pill and her boss states: “There are a thousand reasons we can think of why you should have this thing with you, but mostly it’s for the reasons we can’t think of” The same is true of the iPad. No it won’t cause you to kill yourself, but the usage of the iPad is something that is being governed by the things you cannot think of just yet, not the ones you already understand. Buying an e-reader would be great for your son. It’s an awesome problem to have that he is consuming too many books, and the e-reader would certainly save some money in the long run and on trips to the library. But everything an e-reader can do an iPad can do better. You can read the ‘epub’ digital books that you download from the store, but you can also read PDF files “like a book” or a magazine, swiping from page to page as you go. And that is just the beginning. We bought “Green Eggs and Ham” for the iPad. I hemmed and hawed for awhile saying “why buy a $5 book online when I can get it cheaper somewhere else in paper”. But then I did it and wow was I wrong. Seeing the book on the iPad was a world of difference than just “reading” a book. First the ‘app’ will read to you. It has a voice over that goes through the book and reads the story to the kids. They can then use their finger and touch each and every word and the narrator pronounces it for them: “Ham!” “Green Eggs” “Sam I am”. Or the kids can click on the pictures items in the book and the narrator announces them: “Car, Train, Boat” whenever they click. And the apps go into an amazing world from there. Our youngest has an app that shows him each letter with “–” dashes so he can run his finger along them and draw the letters himself. He has another app that is basically a coloring book, letting him free draw ‘outside the lines’ with digital crayons or dump into pre-laid out shapes bulk colors. Youtube movies are also a favorite, allowing their insatiable hunger for Japanese Bullet Trains to be fed daily (seriously–you can show the oldest a photo of any Japanese bullet train and he spews out the name and model number–“Nozomi 500!” “Shinkasen E5!”). We have never purchased a children’s DVD or video in our life, and probably never will. There simply is no need. He also is playing with a visual periodic table of elements, though generally he just likes the large letters. “H! C! Au!” There are also math apps that drill the kids in numbers, and astronomy programs to learn the stars. It is making huge inroads amongst educators who are reporting that the iPad is really getting to a number of kids in ways books never could. http://www.apple.com/education/ipad/ (Watch the Video here) http://theikidsblog.com/blog/2010/06/14/top-10-educational-ipad-apps-for-kids/ http://sonoma.patch.com/articles/teaching-technology-the-ipads-best-educational-apps Unfortunately, as you pointed out, you are talking a $139 vs. $399 price difference between Kindle and an iPad (they dropped the price on the existing iPad last week to $399). Basically you are talking two Kindles for the price of one iPad. I think one thing you should factor is your wife’s technology usage patterns. Mine simply no longer has time for a computer, nor do we even have space for her to have a computer in this tiny place. My iPad has become her computer for email, occasional web browsing, etc. She takes it to bed with the kids some nights and catches up on her digital life while lying in bed, etc. I’ve more than paid for the iPad with magazines. Here in Hong Kong a single issue of Wired costs $10 US imported. I buy or obtain copies of digital magazines for a fraction of the paper cost. I have literally saved hundreds of dollars on magazine purchases alone over the last 12 months. So for now you might want to save the money and consider the Kindle, especially since 3/4 of the child users in the house you have now might not be as ‘delicate’ in protecting something they probably regard as little more than a remote control (and I’m sure you have stories of how the remote flies around the house). But I also think that in the next five years, you’ll be buying a tablet for your kids that is far more capable. There will likely be no pure e-readers left on the market in the next few years. Anyway, long answer to a short question.]]>