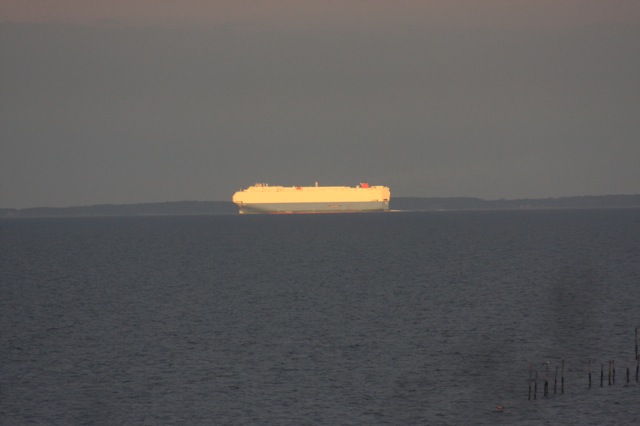 For the last few weeks, I’ve noticed up to the north a couple of RO-RO ships sitting in the Annapolis Anchorage (a deep water anchorage where ships often wait for room on the Baltimore dock to free up before heading to port). I can rarely make out ships up there as they don’t stay that long and due to the Earth’s curve the low lying bulk carriers are usually pretty hard to see.

But roll on roll off (ro-ro) car ships are big bulky looking vessels that catch the sun pretty well and really stand out. I’ve noticed a couple of ro-ro’s up in Annapolis for going on two weeks now, which seems a bit odd. Until I read this story about the backup facing auto importers and exporters in the US, Europe and Japan.

In Baltimore, the MPA moved inventories of Hyundai cars to airport parking lots to make room for cars still on the high seas. The port agency bought about 15 acres of land across from the Dundalk Terminal for overflow space for cars about six weeks ago, but has not yet had to use it. “That’s because the Korean manufacturers, who had never shut their plants down, have cut back production by 30 percent,” the MPA’s White said.

One really wonders if that’s what I’m seeing–a ship full of cars with no place to dock as no one is buying. Or maybe they don’t have the business to export for the GM’s backed up at the plants in Baltimore (apparently there are something like 57,000 new cars sitting around collecting dust in Maryland).