<![CDATA[ <p>When you think about electric bills, you often have a picture of the massive sprawl being built out West, saying to yourself ‘all those damn air conditioners killing the environment. If only they lived in the NorthEast they could clean the air from all the pollution.”

It’s been known and published for awhile that cooling a house is often a cheaper endeavor than heating one. Going from say 30 degree outside to 70 is a lot harder than going down from 90 to say 75, so the theory goes.

So I decided to check into it myself. Using my own power bills for the last two years, I took a look at the usage vs. the temperature and found, not all that surprising, that in my all electric house (heat pump/ac) it cost me the most money in the coldest months.

Anyway, kind of interesting. Here are the raw numbers. I’m going to take a closer look at what this all entails (the heat pump & water heater are the bulk of this expense I think, but I do have a lot of computers and other things running in the house nearly 24/7).

In this table below, the Blue line is the KWH per month and the red line is the temperature. 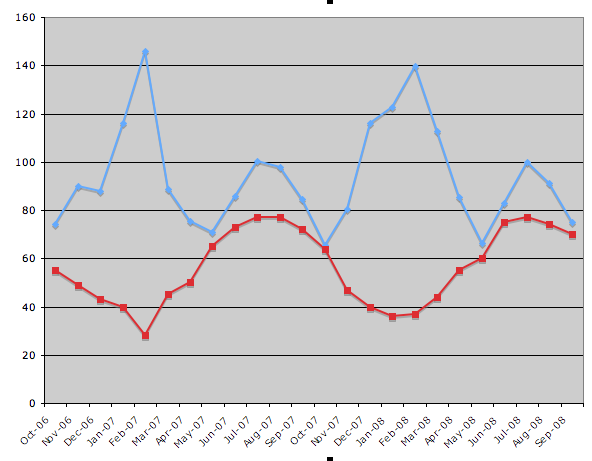