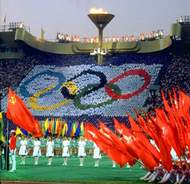 This is a fascinating story about how the Olympics were tainted in 1980 by Soviet ‘officials’ in track and field (yup, it is possible to cheat in athletics). One of the very few Western reporters who went to Russia for the games wrote this fascinating piece about the scandal that most in the US have never heard of before. How the top two triple jumpers in the world had 9 out of their 12 jumps ‘flagged’ for fouls, and how other events were rigged in favor of Warsaw Pact states:

In previous Olympics, the members of the Council of the International Amateur Athletic Federation, which supervises Olympic track and field, had always stationed a red-coated member of the council on the field, one for each event, to keep an eye on the judging — a good idea since all the officials are from the home country.

But after the first day, the Soviets came to Adriaan Paulen, the IAAF’s president, and complained that their officials were upset and insulted because the IAAF officials were watching them so closely.

The unspoken message was that if Paulen would remove the IAAF council members from the field, the USSR and its allies would support Paulen’s bid for re-election as IAAF president in 1981. Whatever his motives, Paulen ordered the council members off the field.