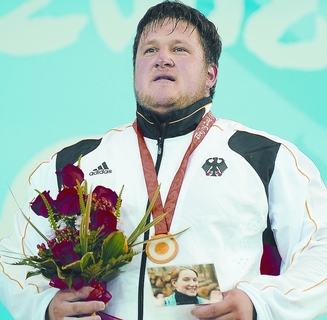 Austrian blood, German uniform, and a gold medal for his late wife.

I am not a fan of weightlifting, and it is generally a pretty boring sport to watch on TV, unless there is an accident and the barbell goes crashing. But yesterday I was flipping the dial and managed to catch the gold medal lift of Austrian German Matthias Steiner, followed by the insanely wonderful celebrations he commenced jumping all over the stage relishing in his accomplishments. (his lifts start about minute 7 on that video)

So I did a bit of searching and found that Steiner was actually born in Austria, but switched to Germany once his citizenship came through due to some disagreements with the Austrian federation. I also then found out what was giving him his strength–the tragic death of his wife in 2007 from a car accident. He threw himself into his sport to deal with the grief, giving all he had to his chosen sport. He had trained 3 years without being able to compete internationally while his citizenship was being processed. His wife passed away before the paperwork came through.

As he stood on the gold medal platform, he clutched a photograph of his late wife along with his gold medal.

One hopes he finds some peace now.

2 thoughts on “Matthias Steiner, born in Austria, weightlifting for Germany, winning the gold for his lost love.”