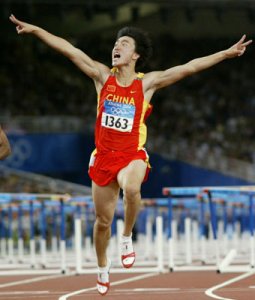 China is in shock. Defending gold medalist Liu Xiang of China, the great hope for a Chinese gold in track and field, has pulled up injured in a preliminary of the 110m hurdles and dropped out of the Olympics. Most of China is in utter and complete shock. In fact thousands left the Birds Nest stadium after he pulled out of the race.

“Liu Xiang has two injuries, one in his foot and one in his leg,” his coaches told a news conference.

“One of the injuries is an accumulated injury. In the past he has not dropped out of any competition easily.

“His right heel injury has been a problem since six years ago, even before the Athens Olympics.

In China Liu Xiang is as popular as Yao Ming–perhaps even more popular as Yao has to compete with Kobe Bryant and Lebron James, but Liu Xiang sort of stands alone (and is also seen endorsing products, in the society pages, etc). This is a major blow to the Chinese hopes for track and field glory, but many folks who follow athletics were expecting something like this. They knew of his injury and the absolutely sick amount of pressure that was placed on Liu to win gold.