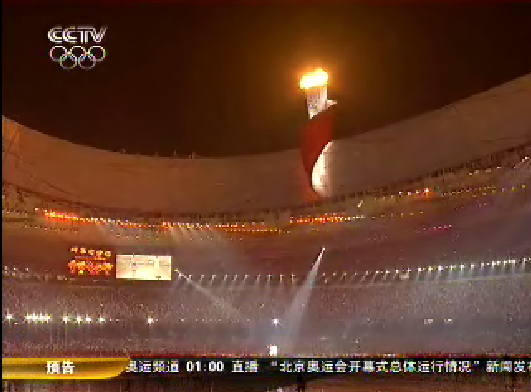 Wow! Unreal. Amazing. That was a pretty cool torch lighting.

First, the The Olympic torch entered the stadium and started a massive relay of about 7 or 8 Chinese Olympic Gold medalists. Nothing too out of the ordinary though the oppressive heat was definitely taking its toll on some in the crowd.

Eventually it was passed to 李宁 Li Ning, the Olympic Gold medalist for gymnastics who ‘took off’ straight up 100s of feet into the air like a kung fu fighter the movies (yes, he was on wires). He then ‘ran’ (you have to see it) around the entire stadium as a giant screen turned a picture of the torch into the faces of 1000s of torch bearers from around the world.

He ran to the end of the stadium and lit a giant ‘pipe’/wick thant shot up into the Olympic Cauldron and the games of the 2008 Olympiad are underway.

It’s midnight in Beijing. It means you have to stay up late to see this. DO IT! WATCH THIS! IT WAS AMAZING.