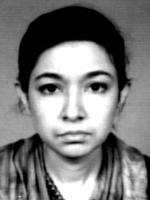 Aafia Siddiqui, FBI Terrorist, MIT Grad, or matronly mother of three extraordinarily ‘renditioned’ to some remote place deep and forgotten, has now been found apparently, wandering about in Afghanistan and taking a shot some US officials (who shot back, wounding her). She’s now going to be extradited to the US on a slew of terrorism charges and basically a resisting arrest charge.

Is she a terrorist or a victim? Hopefully that will now come out, unless they send her to Gitmo where she’ll enter a legal maze that would make any lawyer’s head start to spin. Because the extradition is rather public, she may actually end up in court with a proper defense team.