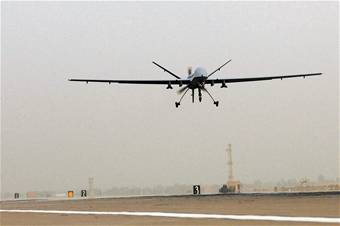 In diplomatic language, that’s a pretty aggressive statement, but after a spate of bombings in Pakistan and more than a coincidental number of ‘last minute escapes’ of senior Taliban officials, the question is coming up more and more according to the BBC.

The burning issue of course is as to who controls the ISI,” he said.

“In their [the Americans’] view there are some people at some level in the ISI who tip off the Taleban at some level about impending missile attacks when these are shared with the Pakistanis.

“They [the Americans] have expressed displeasure over this.”

Mr Mukhtar also openly admitted that President Bush had asked who was really in charge of the ISI during the visit to Washington.

Pakistan is a nuclear power. The idea that the military, or more importantly, the intelligence services are not quite inline with the current government is yet another reason to be a bit fearful of things in the region.

And in case you are wondering what an airstrike looks like on the Pakistan border, here’s some footage of an attack on the Taliban that resulted in (at the same time, whatever) the deaths of several Pakistani border guards (there is a big debate on who is to blame).