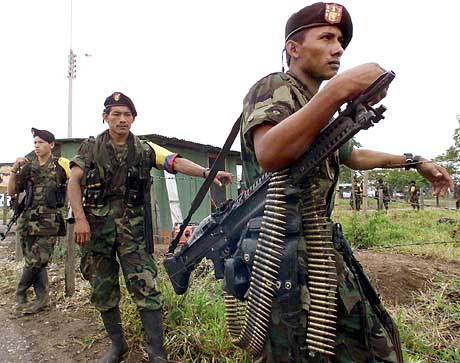 John-Pierre Gontard, rumored to be the ‘leaker’ in the FARC / Betancourt ransom story, finds himself the subject of a story in the German press that does not paint him, or Switzerland, in a good light. The article is based on some of the emails captured from FARC lapotps and points out how Switzerland was less than a neutral mediator in the dispute.

Switzerland has played a central role in the Colombian hostage crisis as a supposedly “neutral” mediator. But the e-mail correspondence of the FARC, extracts from which are available to Die Weltwoche, shows that a solution of the hostage crisis was never in fact a priority for the FARC. The “negotiations” as such, which provided an international stage for the militarily beleaguered guerilla, were from the start an end in themselves for the FARC. The Swiss Department of Foreign Affairs (EDA), under the direction of Foreign Minister Micheline Calmy-Rey, took on the role of helpful courier in the cynical game of poker being played by the guerilla and often neglected to take even the slightest distance from the FARC extortionists.

The article later notes that Gontard was offering political advice to the FARC and how to deal with the US captives:

According to the report, the professor also offered his services to Reyes as strategy advisor in the poker game surrounding the hostages. The three Americans that the FARC have likewise taken captive are, according to Gontard, “definitely members of the CIA, the governments represented by him have no interest in them.” On Reyes’s account, Gontard advises him, nonetheless, not to kill the three Americans and to “preserve them in very good condition, since they could still be very useful sometime in the future.” The Swiss professor reportedly tells Reyes that a FARC demand for one hundred million dollars in exchange for a six month ceasefire is realistic. And verbatim: “He says that Ingrid is a jewel [una joya] in the hands of the FARC, because she is very important for the French government.”

Finally, the German press slams Gontard and the ransom story:

The false report concerning a supposed ransom payment originated from his milieu. With it, Swiss diplomacy has lost its last trace of credibility.

It is also worth noting that no additional information regarding a ‘ransom’ has been discovered by any media since the initial claims. Reading through the stories that have been published, they are most a rehash of the original rumor, or slight (and unprovable) theories surrounding the story.

Normally when you have a ’scandal’ story it gets people to digging, but all that has been dug up since the initial press release is, well, nothing. Slightly odd. One would hope even the ‘truther’ types would come up with some explanation that was at least interesting. We’re still waiting for the facts.

Counterterrorism blog has more on this and the Switzerland diplomatic ‘dance with the devil’ policies around the world.