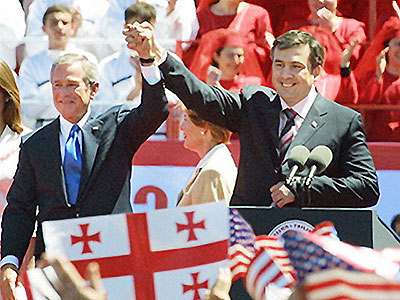 The President of George has called “Russia a Menace to Peace” in the recent war of words between the two countries. Last week Russia admitted that four aircraft flew over South Ossetia, the breakaway region that is the source of much controversy between the two governments. This comes during on top of the Russian ‘change of heart’ on Zimbabwe sanctions that saw them exercise their security council veto power.

This is one of those troublesome conflicts that could easily become a hot war in a matter of moments. The Russian military, still a hollow shell of their strength during the Cold War, is more than capable of inflicting great damage on Georgia’s military. Though small, Georgia has been making substantial purchases of armor in recent years.

The weaponry purchased reportedly includes armored personnel carriers, self-propelled artillery, helicopters, and T-72 tanks. The latter three items called into question earlier statements that Georgia has no aggressive intentions and plans to strengthen its armed forces exclusively for defensive purposes, to repel any external invasion. These weapons are well suited for an offensive against the Ossetians. From mid-June to mid-July 2005, some 800 Georgian troops conducted large-scale tank exercises using some 170 battle tanks. One year earlier, Georgia had only 76 T-55 and T-72 tanks.