<![CDATA[<a href=http://news.bbc.co.uk/2/hi/asia-pacific/4732042.stm>The BBC is reporting that the birth father of Toby Dawson, American bronze medalist in skiing, has been located in Korea after the medalists photo was splashed in the media there. Dawson, 27, was adopted by US parents in 1982, from an orphanage in Seoul who did not know who his parents were. Kim Jae-su, 52, said his lost son went missing during a shopping trip with his mother near a market in the South Korean city of Busan, in 1981. Dawson was found near the same market, South Korean’s Yonhap news agency said. I guess it will come down to the DNA testing. I hope it isn’t some guy who just lost his kid and is searching for an answer, but I guess we’ll see. 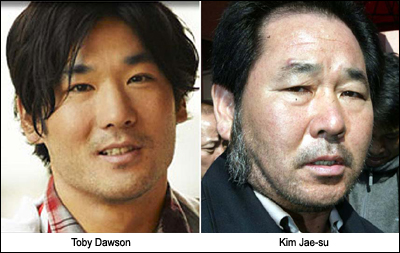 Dawson and the man claiming to be his father.]]>