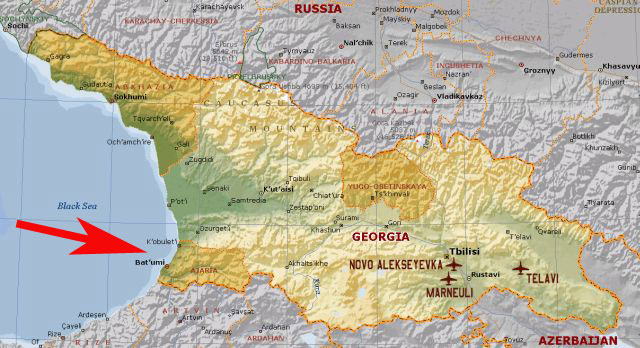 Because you probably don't know where it is either.

Debka, which is NOT one of the most accurate websites in the world (but still pretty interesting) is reporting that the quasi-breakaway region of Adjara (also spelled Ajaria and Ajara) in the Southwest corner of Georgia may be ripe for the pickings by Russian naval forces. The population of Adjara is split between Russians and Muslims and there is a bit of discontent with the Georgian government (though not as much as in Ossetia). After a briefing crisis, the former separatist leader was sent to exile in Moscow.

There is/was a Russian naval base in Batumi, and another small garrison elsewhere in the region that is supposed to be turned over soon. However, Batumi is the pipeline <-> ship port for Georgia and having control of this vital location is certainly of interest to some in Moscow.

It will be interesting to see how far Russia goes in ‘punishing’ Georgia and whether this might include the port at Batumi. 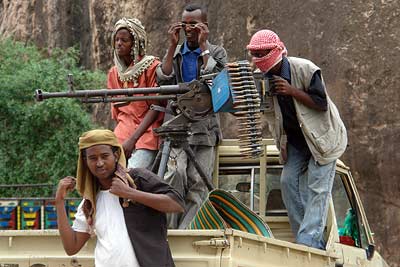 It's not a tank but it can still hurt you.

The London Times is reporting on a new offensive launched in the Dafur region of the Sudan. 300 ‘technicals’ (militarized civilian vehicles) are on the move in a major push in Northern Dafur. Oil companies have been asking for this area to be pacified so that they can begin seismic surveys in the never ending hunt for new oil sources.

Suleiman Marajan, a commander with one faction of the Sudan Liberation Army, said yesterday that the Government had lied to the world with its message of peace.

“The Government of Sudan has attacked our places with 300 vehicles. They have been here for three days protecting Chinese oil workers,” he told The Times by satellite telephone from North Darfur.

There has been no comment (or action) from either UN or African Union peacekeepers regarding this latest offensive.

Interestingly, the roots of the term ‘technical’ have never been definitively proven. It is believed that the term (which came to most people’s attention during the Somalia crisis in 1992) arose from the use of ’security contractors’ and ‘warlord bribes’ made by aid agencies operating in Somalia. These payments were called ‘Technical Assistance’ on the expense reports and the name ‘technical’ sort of stuck as a way of describing a militarized (but non-military) vehicle.