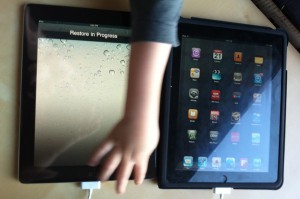 [/caption] My mom bought it in her hometown in South Carolina. She went to a Best Buy about three hours after it went on sale. I pressed her and pressed her to go earlier but she replied “the people in this podunk town are too poor to buy anything”. Guess what? she was right. She walked into the store, back to the iPad section, and was second in line behind a guy who walked in just before her. The clerks told her earlier they had a long line, but she timed it just right to get there when no one was around. Fast forward a week and a few and it has arrived in Hong Kong. The post office made me go fetch and now I’m back starting the rather time consuming task of moving over all my stuff to the new device. First quandary was how to set it up–either as a “new iPad” or “restore from the backup of the old one”. I wasn’t quite sure so I went with the restore option, though in retrospect (i.e. the 20 minutes it took to do the restore) I discovered I could probably do it either way, syncing the apps and whatnot later on. First impressions is that it’s quite a bit thinner than the older one. The ‘scuba suit’ cover that was on the older version folds back and makes the entire iPad 1 look quite a bit ‘fatter’ than it really is. I’m still impressed when I see one of the originals without a cover (which is rare) as it looks so much smaller than mine which is wrapped in the Apple black latex. I got the ‘smart’ cover (black leather) that I’ll be setting up as soon as the sync is done (god it takes awhile). The new screen, sans fingerprint smudges and cracker crumbs and whatever else a year of use has puts on it, looks gorgeous. Of course it is basically the same as the old one, but it’s clean. I’m not going to sell the old one. While that’s normally my standard procedure as I’ve sold every iPhone I’ve ever owned right after buying a new one, this iPad had the secondary market take a hit with Apple’s price reduction, and we actually have a need for it in the house. The wife can’t use my computer usually as this room is too tiny, but she needs access to her email and celebrity gossip sites so iPad 1 becomes “hers” along with one of the boys, and iPad 2 is mine with the other kid. So, let’s see…time to start the sync…and… Apps transferring…(giving kids a bath) Now to the music…(made a sandwich) Now the pictures…(browsing the Internet) and a bunch of other stuff for about an hour and a half now…. We’re done. Some hints for your first install: Do a backup of your existing iPad before you start this process. Nuke any podcasts / videos / songs you don’t want to sync (saves time) I sync’d 2000 photos faster than 1,100 songs, fwiw Consider doing your first sync overnight when you don’t have to sit and watch the slow process. Ok, now to play with it. The magnetic screen cover works as advertised. Open it and it comes on, close it and close it and it shuts down. I’ve already noticed that I’m still hitting the power button to turn things off rather than just close the screen. Old habits will take a bit to slow down. The home screen now has two new icons. One is Photobooth, which you can use if you are feeling like self portraits with the rather grainy camera. The other is Facetime, which I’ve yet to check out. I showed the wife and let her hold both of them. “The new one is heavier” she wrongly observed (iPad 2 is .2lbs lighter). It definitely is thinner. You can feel that holding it. It also feels ‘faster’. Some apps like Flipboard were really loading quite quickly, and I look forward to playing Infinity Blade later today. But now for the most important test: how much gloating can I do with this? I’ll be heading over to a few of my haunts today to be “that guy” who has the newest toy. Feel free to call me a jerk later if you see me.]]>