Navy’s slot back ran for 348 yards on 19 carries. Navy won 41-13 or so, but quite honestly, I’m exhausted. Towson State threw the ball nearly every play and dropped it nearly every other time, so the clock moved about as slowly as humanly possible for a football game. Socked in the heat and humidity, and eventually playing to the point that the lights had to be turned on, many of the 31,000 didn’t even stay past halftime. 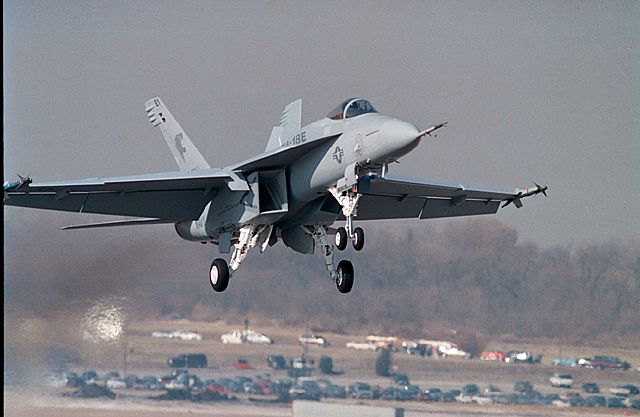 From the Annapolis Capital re: tomorrow’s home game against Townson.

I like seeing the C/D and E/F variants flying together. You get a good idea of the size difference between the two when they fly side by side.

PREGAME FLYOVER: FA-18F Super Hornets from Oceana, Va., will be featured at 3:30 p.m. Piloting the lead aircraft is Lt. Nate Spurr (Class of 2000) and his weapons system officer is Lt. Cmdr. Joe Ruzicka (1996). The wing aircraft is piloted by Lt. Melanie Byrd (2002) and her weapons system officer is Lt. jg. Jessie Grove (2003). The flyover also features two Boeing F/A-18E Super Hornets from the Knighthawks of Strike Fighter Squadron 136 out of NAS Oceana. The pilot of the lead aircraft is LT Pete Scheu (2002). The pilot of the wing aircraft is Lt. Ryan Segrest (2004).

The Knighthawks just recently returned from two back-to-back combat deployments with Carrier Air Wing One on board the USS Enterprise. During both deployments, the Knighthawks expended more than 15,000 pounds of ordnance in support of Operations Iraqi Freedom and Enduring Freedom.