Of course with yesterday’s “New Course” announcement there has been a lot of talk about Google surrendering the market to Baidu or other search engines in China.  But I was curious and decided to take a quick look at the numbers right now for revenues in search in China.  I was actually quite surprised at how little is being made there.  And as I thought about it, I realized this really isn’t about money at all, when you start to take this up the ladder to the global politics that might soon come into play. Baidu (BIDU) brings in about 3,194,000,000 in RMB per year, or about $467 million dollars annually.  This comes from revenue from search (i.e. ads) but also from subscriptions services offered by Baidu, some of which are notorious for providing links to copyright violating material (think Napster-like). Google (GOOG) has revenues worldwide of about $21,795,000,000 US$ per year.  This works out to about $419 million per WEEK.   So, even if Baidu was to explode tomorrow, and Google get all the of the revenues formerly received by their competitor, you’d be looking at something like a 2% increase in the overall revenue picture for Google.  Given that Google has only about 1/3 of the search traffic in China, you have to figure they are not bringing in more than $100-$150 million in total revenue from their operations there. For Google, that’s just chicken feed.  They spend more than that on green tech projects as sort of a side business. You have to start to look at the value of the Google brand, such as Gmail’s security, Google’s overall public relations (which is scoring a major coup today) and some new projects like the reliability of Android, Chrome and the GPhone.  These are multi-billion dollar projects in the future and with problems in China affecting the value of these brands, it starts to make sense, from a financial standpoint, to sacrifice Chinese search revenues for the long term value of the Google name. There is a lot of chest thumping on some of the nationalist messageboards in China, and I’ve even seen some posts saying that by leaving China, Google is going to hurt the overall US economy and continue the recession.  Some are playing this as Baidu beat Google at their own game, but the reality is probably a bit different than that.  Sure, Baidu has commanded a greater market share, but Google just went over their head and made it not Baidu v. Google but China v. Google.  In the worldwide court of public opinion, in which the reputation of “Brand China” and “Brand Google” are at risk, the issue of a few hundred million in search revenue grows even smaller.   The anti-China forces on Capitol Hill are now licking their chops.  There is a growing sense of an impending trade war and this spat may end up, in the long run, costing China, Inc BILLIONS should the negative perception of the Chinese government continue to grow and develop into economic sanctions of one sort or another.  China is starting the year as the ‘bad boy’ for their actions in Copenhagen, and now they have this problem to deal with.  In a country in which face matters, the Chinese government is certainly paying quite a bit of attention to the steady stream of supportive press that Google is getting for thumbing their noses at the rules.  This is going to be interesting…]]>

Well this was not unexpected. Google has announced, on their English-language blog, that because of cyberattacks directed against certain human rights figures who use Google email accounts, Google is going to stop filtering their searches and if the Chinese government doesn’t like it, they are going to pull up stakes from China. I’m shocked, shocked to find that evil is going on in here. Google has never really been all that reliable in China.  The government is constantly interfering in search queries to google.cn, and the google site is frequently inaccesible within the country.  Baidu, Google’s clone in China, has frequently mucked about with Google’s operations in China, from being a tattle-tale about bad searches for porn to even more blatant (and quasi-illegal) actions behind the scenes and, possibly, under the table. Google has thrown down the gauntlet after a relatively minor event.  Some may say this is the straw that broke the camel’s back, but in reality, this whole thing, China-exit/Woo-the-world’s-press was sitting on a shelf waiting, just waiting for an excuse to be put into operation.  I just have to wonder, why today? While the Baidu folks and Chinese nationalists are screaming ‘we won’ the reality was it wasn’t necessarily a race that had to end on January 13, 2010.  I doubt Google’s China operations were costing that much vs. the cost of their revenues.  And generally, while a consistent black-eye to the company, there hasn’t been a flurry of anti-google PR in recent months for their operations in China. So I just have to wonder why January 13, 2010 is the date in which it all ‘just became too much’.  Is something else about to happen?  Was the writing on the wall that there was going to be some larger changes within China–some additional censorship or legal requirements?   We haven’t heard the full story, by a long stretch.  Perhaps in a few months I’ll get more details when I’m back in China, but for right now, the whole thing just seems a bit like an ‘excuse’ rather than a ‘reason’. UPDATE:  For what it is worth, Baidu’s revenues in China are approximately $450 million a year US.  Google’s revenue’s world wide are approximately $21 billion, or nearly 50 times larger.  Google makes in about a week what Baidu makes in a year, so walking away from the China market right now really isn’t going to hurt the bottom line.]]>

The original G7 group of industrialized nations, who have an eighth member who is sort of there by default, have called on Russia to pull back their forces from Georgia

We, the Foreign Ministers of Canada, France, Germany, Italy, Japan, the United States and the United Kingdom,condemn the action of our fellow G8 member. Russia’s recognition of the independence of South Ossetia and Abkhazia violates the territorial integrity and sovereignty of Georgia and is contrary to UN Security Council Resolutions supported by Russia. Russia’s decision has called into question its commitment to peace and security in the Caucasus.

We deplore Russia’s excessive use of military force in Georgia and its continued occupation of parts of Georgia. We call unanimously on the Russian government to implement in full the six point peace plan brokered by President Sarkozy on behalf of the EU, in particular to withdraw its forces behind the pre-conflict lines.We reassert our strong and continued support for Georgia’s sovereignty within its internationally recognized borders and underline our respect and support for the democratic and legitimate government of Georgia as we pursue a peaceful, durable solution to this conflict

Russia continues to ignore most of the world’s call for a troop withdraw. They’ve pretty much given up on WTO membership but the threat of expulsion from the G8 might resonate a bit with those in Moscow who like international organizations. China issued a rather curt statement against the Russian actions today. Russia thought they could find a supporter with the Chinese, apparently oblivious to the fact that China has several regions of their own that wish to be independent.

Yet another bomb in Xinjaing, this time killing two and injuring several.

Xinjiang is home to the Muslim Uighur people who have been fighting a low-level campaign against Chinese rule for many years.

Well that’s something we’ll probably have to wait until Friday to find out. Rumors abound that sites like myp2p.eu will have tons of links that work with TVAnts and Sopcast, but ‘officially’ all Internet streams are supposed to be ‘region locked’ to specific areas.

FTA (Free to Air) satellite might also yield a few stations that have streams. CCTV 4 and CCTV 9 are not going to have live coverage apparently as only CCTV stations within China will be allowed to show the games. Of course CCTV 1-10 are the most popular stations on most Internet TV p2p programs.

There are lots of hints of ‘destructive efforts’ to prevent pirated feeds from going out on the net, and with the Chinese government sitting on some massive computer power and a certain less than ‘live and let live’ attitude, I suspect we’ll see some interesting jamming activities. 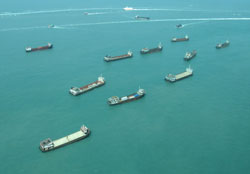