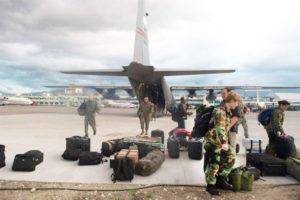 Currently, we’re operating with a working maximum aircraft on the ground of one wide-body and five narrow-body aircraft. And the one wide-body is planned for two hours on the ground, and the five narrow-bodies are planned for one hour on the ground. We also have room for three smaller aircraft, and then we fit in as much as we can other aircraft that arrive that we have space for. Any aircraft that can taxi into the grass and get off the ramp that the big aircraft need to be on, we use that option.

There’s been the typical “it’s a disaster because I’m not there” claims from some aid agencies and amongst those in Europe.  Some counties have even sent large commercial aircraft, including a Chinese 747, a Dutch KC-10, an Iceland 757 and other civilian airliners to a tiny airstrip that basically has very limited loading and unloading facilities.  Other countries and aid agencies basically ignored ground controllers and crashed the line of planes, basically saying ‘we’re going to run out of fuel and crash if you don’t let us land’ thus creating even more chaos and confusion. Cargo planes that require complicated loading and unloading trucks might not be the best option in these situations.  American C-130 and C-17 aircraft are accessible directly from the ground, no “lift trucks” needed to remove and equipment can be driven off by a forklift rather than slowly disembarked by complicated machinery.  Perhaps there is a need for standardizing the airlift requirements of the Haitian airlift. For example, check out some of the guidelines that were used in the Berlin Airlift requirements:

In August, General William Tunner, a veteran of supply runs during World War II over the Hump (between India and China), arrived to direct and standardize operations to increase efficiency and safety. He discouraged flying heroics, saying that ” a successful airlift is about as glamorous as drops of water on a stone.” And the new flying regulations reflected this, leaving little room for error. Airplanes took off every three minutes, around the clock. They maintained that interval throughout the 170-mile (274-kilometers) flight, not veering an inch from the prescribed route, speed, or altitude. When they arrived in Berlin, they were allowed only one landing attempt. If they missed it, they had to transport the load back to base. When each plane landed in Berlin, the crew stayed in the plane: a snack bar on a wagon gave them food, and weathermen arrived in jeeps with weather updates. As soon as Germans unloaded the last bit of cargo, the plane would take off. Back at base, there was a 1-hour 40-minute turnaround allowed for ground crews to refuel, reload, do preflight preparations, and perform any required maintenance, which was considerable as the engines experienced rapid and excessive wear from the short flights. Tires also experienced extreme stress from the heavy loads and hard landings.

I wonder if turning Homestead ARB into a cargo redistribution center would be a better idea than having all manner of strange aircraft trying to fight their way into Port au Prince.  Have the planes of the world come to Homestead, consolidate their loads and cargos on easy to load and unload C-130s and C-17s, and then create an orderly and pattern-packed line of aircraft into and out of Haiti. It’s just a matter of time before some Airbus breaks down in Haiti and requires a special part flown in from France.  If we are serious about an air bridge, maybe we should consider standard aircraft, standard loading / unloading requirements, and standard parts and repairs to keep the flow of aid moving. Interesting end note:  the other international airport, Cap Haitien, may soon take more flights.]]>