HKG are a lot cheaper than HKG->USA. A roundtrip from the US is $700 or so, but roundtrip ‘back’ is $1000 on this end. Go figure. Plus with the London factor coming into play, I have to decide if I want to go the other way (HKG-London-US). I think it is time for a travel agent on this one. It’s too much for me and my little Internet websites to figure out.]]>

Podcasting and the Podcasting Directory I’ve built. This evening I had 89 podcasts and about 300 different shows, but I finally got my OPML parser to work and the number of feeds shot up to 212 and the number of shows topped 1,000. Then all hell broke loose. Many of the feeds were dupilcate, some of the RSS was improperly coded. There were HTML files mixed in with the XML (crashing the parser) and all sorts of other problems. I ended up erasing all the updates I made and then hand cleaning the directory back to 140 feeds and running the parser again. Now it is at 153 feeds and 1100 different shows. And I’ve yet to find the time to actually listen to the podcasts I’ve downloaded, but at least the directory is up and running.]]> 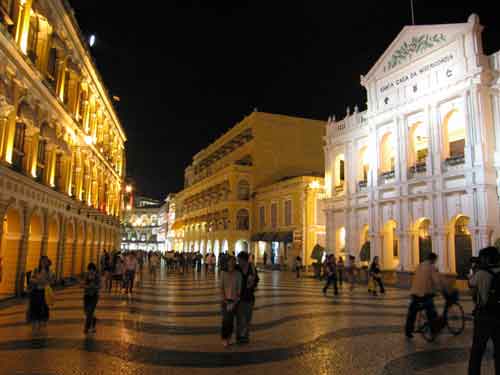 As you see above, the old town (San Ma Lo) area of Macau is very pretty and quite European. We walked around the downtown for a few hours, looking at the shops. One thing they sell quite a lot of is beef jerkey and these homemade cookies that taste sort of like sugar cookies made with sawdust. I ate it and was like “mmm, cardboard” but the wife said, as the same time and with a serious face “it is too sweet.” Go figure. We did the other tourist things, like visited St. Pauls in Macau which was built in the 1600 but is now just a facade due to a fire two centuries ago. We climbed up on the top and threw a “lucky coin” on the window sill. Mine rolled on the edge, across the sill and fell 30 feet onto the tourists below. Someone either has a bump on their head or thinks God is throwing money at them. We had $3 US bowls of soup for dinner before heading home. We took a catamaran back that wasn’t as smooth as the hydrofoil, but did the job (for a bit less too). ]]>

Yahoo is reporting that pre-election terror sweeps of the usual suspects picked up 700 for immigration violations. Not sure how many terrorists might be in that lot, but there weren’t any terror attacks. I often think back to the Ghostbusters line when he is testing the refridgerator for ghosts and says he isn’t getting a reading. PETER I’m sorry, I’m just not getting any reading. DANA Well, are you sure you’re using that thing correctly? PETER Well, I think…so…. But I’m sure there are no animals in there. So did it stop terrorism? There were no attacks during the election…. ]]>

1) Foreigners don’t get America. They get all their information from biased sources, and that leads to a warped and incorrect view of America and Americans. The dislike existed long before Bush, and has roots in differences of basic values such as hard work, creativity, attitude, elitism, snobbishness and other factors that are secretly under the surface of most anti-Americans but which manifest as “We love Americans, just not the government.” Yea right. Get them talking long enough and you’ll see they dislike far more than the government. And I’m no Xenophobe. I spend more time overseas that most Americans, and have a phone book that has a number ringing in nearly every time zone. I read as many foreign papers as American ones, but most foreigners I’ve talked to about politics are simply very shallow and simplistic in thier views on Bush and Americans. They just don’t get “it.” 2) Kerry’s staff hated Bush. Every single comment by Bush was greeted with a disdainful and cyncial reply by the Kerry staff. This bitterness came through to most readers–they never answered a question but challenged (snidely) Bush at every chance. Listening to them was simply painful, and after a while, I think a lot of basic people just turned them off like they do a rambling uncle or a fanatically aunt. 3) Gay rights is not ready for prime time. What one side would have you write down as bigotry or ignorance is regarded by the other side as a biblical truth. It’s there–in the bible–that homosexuality is not right, and many Red voters follow that line. Blue voters trying to convince them differently have got to smashing homosexuality in their face and find a way to move them to their viewpoint in line with the teachings they believe. 4) Red and Blues don’t talk. This election was two fists punching each other, and the conservatives won because they were better mobilized although probably equally motivated. The numbers months ago showed a highly divided electorate, so the GOP had to follow a course of simply motivating more of their existing people to show, rather than win a relatively small (and probably unwinnable) middle. With the press against Bush at every turn, it was simply impossible to reach out to this middle. So they turned out in numbers their Red. The Red states got Redder. The Blues are lost because they have been living in a bubble of other Blues. 5) Kerry isn’t the anti-Christ. I don’t like the guy, and feel he represents all that is wrong in politics. I wanted to make bumper stickers saying Kerry is Jerk but never got around to it. He just strikes me as the kind of guy I would get in a fight with if I was even remotely drunk and his little smug face showed up in a bar. But in the end, I felt the last week of the campaign was relatively clean. They tried (and failed) to make an issue of the missing weapons, but at least the Clinton-Gore sleaze team of last minute DUI stories or made-up indictments from insane special counsels were out of the picture this time. At the very least, I give Kerry a little respect for carrying on in the last week better than his predecessors. 6) Blues need to open up. I’ve said it twice here, with foreigners and blue bubble people–they both are rather closed-minded. A lot of Blue people are out of the mainstream (as our Reds) and it is time to, at the very least, read a book or a website of someone you don’t agree with. The Amazon Red-Blue book chart is very depressing–people aren’t even approaching things from the same point of view on the basic facts now. Reds need to learn more about the middle, and maybe some Blues, but they aren’t about to do so until the next election cycle comes around. I hear so many International commentators saying “America needs to adopt to the Arab/European/Asian view of the world” (which is what many Blues say too) but turn it around and say “the Arab/European and Asian world needs to adapt more to the American way” and all hell breaks loose. It’s actually kind of funny. 7) There are PhDs who voted for Bush. Billionaires, Venture Capitalists, Scientists, Doctors, Lawyers, Cops, Fireman, Wal-mart workers, bowling alley shoe cleaners, gays, clergy, farmers and a slew of other people as well. Painting them all as “morons and rednecks” as many are trying to do is just more of the same problems we’ve experienced thus far, and will lead the Blues into a deeper isolation than they already feel at this point in time. The Washngton Post is already talking about this. Ok, that’s it for now. ]]>

<![CDATA[<a href=http://neurotic-iraqi-wife.blogspot.com/2004/11/loss-of-great-leader.html>The Leader of the UAE passed away. Sheikh Zayed turned a scrub of the desert in a tiny corner of the Middle East into a model of development that much of the Arab world look at with awe. No, this isn’t some golden plated Trump like creation made simply on the oil, but a far more advanced and diverse economy that could be the model for Iraq, if only they’d stop shooting each other.]]>