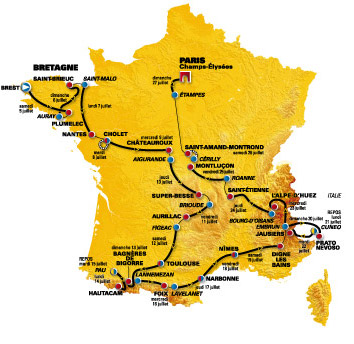 Ok, if you’ve been uninterested or unmotivated to watch the Tour de France up to this point, the time is now to tune in. Coverage starts most days at about 8:30am on the Versus channel, which was formerly known as Outdoor Life Nework.

Yesterday the Tour started up in the Alps, where it will be for the next two days. The three top leaders are separated by all of about 10 seconds, and it is in the mountains that time shifts are the most vast. Tuesday and Wednesday see them up in the Alps, and this is probably where we’ll see the winner come forth, eventhough there is about a week of racing before Paris.

Or course there is now the annual drug issue confronting some teams, but there is also some criticism of the current Yellow Jersey holder Frank Schleck from his own team coach.

Tune in and watch the battle….