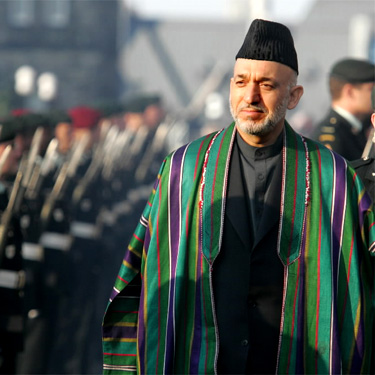 Is he his brother's keeper?

The New York Times is asking that question today.

When Afghan security forces found an enormous cache of heroin hidden beneath concrete blocks in a tractor-trailer outside Kandahar in 2004, the local Afghan commander quickly impounded the truck and notified his boss.

Before long, the commander, Habibullah Jan, received a telephone call from Ahmed Wali Karzai, the brother of President Hamid Karzai, asking him to release the vehicle and the drugs, Mr. Jan later told American investigators, according to notes from the debriefing obtained by The New York Times. He said he complied after getting a phone call from an aide to President Karzai directing him to release the truck.

Afghanistan is a mess politically, so it’s entirely possible this is just a smear attack from his opponents. But then again, Afghanistan is also awash in corruption and drugs, and if something like this did touch into Karzai’s inner circle I don’t think anyone would be surprised.

Corruption is killing Afghanistan (as it is killing other countries as well). But unlike say China which has rampant corruption, Afghanistan doesn’t have the economic muscle (or internal security muscle) to keep people in line despite the bribes that have to be paid.

Fighting corruption worldwide is going to be the biggest battle we face in the next 20 years of foreign policy. With China, Russia and much of the developing world along with many large European companies in a sort of de facto alliance of ‘this is how we do business’ the fight against corruption may be one that we may not win.