UPDATE: After a few fits and starts, we now have DOCSIS 3.0 service.  It required me to replace my 7 year old router (who’d of thunk that?) but now all systems are go and we have, ta da, 60mb down.

Well, I survived, more of less. When I was in Hong Kong, there were basically only a few channels of English programming. BBC World, CNN International, DW (English and German), the English Premier League soccer channel and ATV, which showed reruns of 24 and a few other tv shows. In fact, while I was over there I started watching the ‘Drew Carey’ show simply because it was on (and later, because it actually was quite funny at times). That last little bit is kind of funny. After the cable was ‘cut’ the TV turned to static. I then connected the wires and whatnot and ran the auto-tune on the TV to find the channels. When it has finished it stopped on the ‘ION’ Channel which is a DC-based repeat channel, and believe it or not the opening credits for the Drew Carey Show were playing on the TV. Talk about a weird flashback. It hasn’t actually been total, as we’ve been able to get some digital feeds from over the air and through other means, so TV hasn’t been totally ‘gone’. But on those few occasions when I flip on the TV (which now runs through the computer, btw, rather than through the TV tuner) I’ve pretty quickly been able to ascertain ‘there is nothing on worth watching at this moment’ pretty quickly. I’m sure I probably could have seen Notre Dame’s horrible loss in hockey last night, or a better movie than the one I watched last night had I still had all the movie channels and the on demand library, but I don’t think I’ve missed all that much. I’ve been doing a lot of TIVO’ing off of the over the air signals and integrating with Boxee, Hulu and Front Row on the Mac. There is a pretty cool media interface set up now where we can flip between all the content we’ve recorded and even more that is online (note to apple: Boxee will kill you unless you expand Front Row to include online content). We’ve grabbed a large number of Thomas the Tank Engines (to replace the ‘on demand’ feature we had before) and also a couple of MI-5 episodes and Mystery, a show we like to watch when relaxing. We’ve watched two DVDs this week and, perhaps thankfully, I spent two nights going to bed about 8 pm with the kids (so that I could be more functional at 5 am when they awoke looking for their trains). One week down, many many more to go.]]> 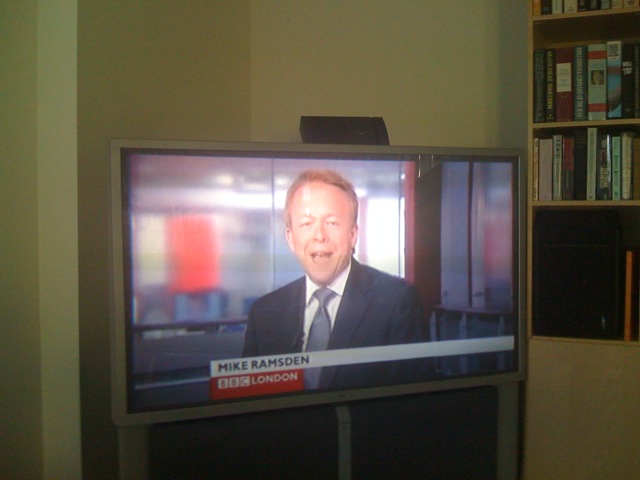 Well we had a bit of a grace period while they worked out just exactly how to disconnect things, but just a few moments ago the remnants of the CNBC feed disappeared into static. It’s kind of like a power failure–there is no more cable in the house.

We got by pretty well last night. We sat down and booted up Hulu to watch the NBC Show ‘Kings’ (which we actually kind of liked). Tonight it is Quantam of Silence — the first James Bond I haven’t seen in a theater since I was an infant (because we had a newly arrived infant that prevented me from getting out to the cinema). Tomorrow may be a better test when I’ll be relying on IPTV in total to keep abreast of the news.

The BBC is coming in pretty well. Here’s a picture of last nights 6:00 news streamed live into the house.

So I’ve decided to do it.

A news junkie cutting the cable and going without the joy that little coaxial brings into my home.

But fear not, I’ve made alternate arrangements for my ‘tv’ viewing.

I have a Mac Mini in the garage that currently serves as a ‘development’ server for my websites. It’s coming out of the garage and will be connected via DVI cable to the TV in the house. The Mini is great for this as it has a very low electricity usage footprint, something like 30w or so. I may end up boosting the memory to 4gb if playback suffers, but we’ll see. I will likely reduce the image quality on the display to 780pixels or so, which is still pretty good but nothing like HDTV. Reducing the resolution means those small streams that show up as a tiny ‘box’ on my computer display will be somewhat larger and more lifelike on the big screen.

I have a ‘big dish’ outside that gives me access primarily to foreign television over the Ku band. This FTA ‘free to air’ system brings in 1000 channels or so, but most are not in English and it’s not like the stuff you see on your regular television. I also have an eyetv attached to the Mini for recording purposes. I’ll be able to record ‘over the air’ content that comes down, which should include the big networks and PBS.

Joost, Hulu, Redbox, and Netflix are all in consideration. Of course most of the movies on the first two I’ve seen before (and don’t really need to see again) but Redbox ($1 a night movies) and Netflix ($9 a month) are offering up first run movies. If I get Netflix streaming working I’ll have a bunch of other content as well.

Hulu is best for this. I’ll be watching a great deal through Hulu I suspect. Boxee will also come into play for some playback, mainly the podcasts I like to watch. I’ll be using the Boxee iphone remote for much of this, and the Mac Mini has a remote as well I can use.

I will be using Livestation for many of my live TV programs. This will give me some news channels to watch and occasionally some other content. I also will be utilizing a number of streaming websites that have video content. As I have a computer in the UK I’ll also be able to watch some content from the BBC, which should help feed the ‘news junkie’ monkey on my back.

Really, there is not much of a substitute for this. But given the fact that Comcast seems to be degrading the quality of HDTV, I’ve started to notice the channels that once made my jaw drop are now looking little better than standard digital channels. If I throw an antenna up on the roof I may be able to pick up some HDTV over the air, but just like the switch from ‘full quality CD sound’ to ‘MP3′ I’m not entirely sure I’m going to miss HD content right off the bat. (I may consider a PS3 or something else with a Blue Ray so I can watch some HD stuff now and then.

That might not be a bad thing. Everyone has at one time or another ‘watched something just because it was on’. I think that will be eliminated in my new IPTV world.