Periscope. It is easily in the hundreds, as I have been making videos since the first day of the public release and now have over 31,000 followers. In using an app this thoroughly, I’ve come across a few features that would really enhance the experience from a broadcaster’s perspective. So without too much ado, here is my wish list for new features for Persicope: Time and Temperature. It seems so easy, possibly a throw back to the 1970s when every bank had a blinking time and temperature sign, but probably the most asked question I receive is “What is the Time” and “How it the weather?” A new update for the iOS app has added time to the map, but personally I’d prefer it on the main video, perhaps as a 10 second overlay every so many minutes.  Just a little time and temp ‘bug’ that pops up on screen or in the chat to save me having to be a weatherman and a clock every few minutes. Chat response presets I spend an inordinate amount of time re-answering the same questions day after day. “What do you do?” “How old are you?” “Why did you move there” etc. It’s gotten to the point that even some of my regular viewers can answer the questions should I not notice them. What would be really helpful would be five buttons on the side of my screen or appearing through a ‘long touch’ that would pump into the chat preset answers or statements from me to my community. If I could save short amount of text as a  preset answer I could just click ‘1-2-3-4-5’ and focus more on being alive and less on repeating myself. Pause the Phone Facebook Live has a new feature that Persicope needs. The ability to put a broadcast on ‘pause’ when someone calls in on the phone. It is absolutely frustrating when you have a good Periscope underway only to have a phone call come in and disrupt or disconnect the stream. A pause, perhaps with a little “telephone icon” appearing on the screen would be a wonderful addition. Scroll back of comments When comments are fast and furious, or when a broadcaster is walking down the street, it’s incredibly easy to ‘miss’ a comment as it has faded or passed from view before you had a chance to react. The ability to scroll back even only 5-10 seconds would be a welcome addition, as a broadcaster could go back and see a comment even after it has faded from the screen. A swish down over the chat to pull up the last few comments in a conversation would be quite helpful. 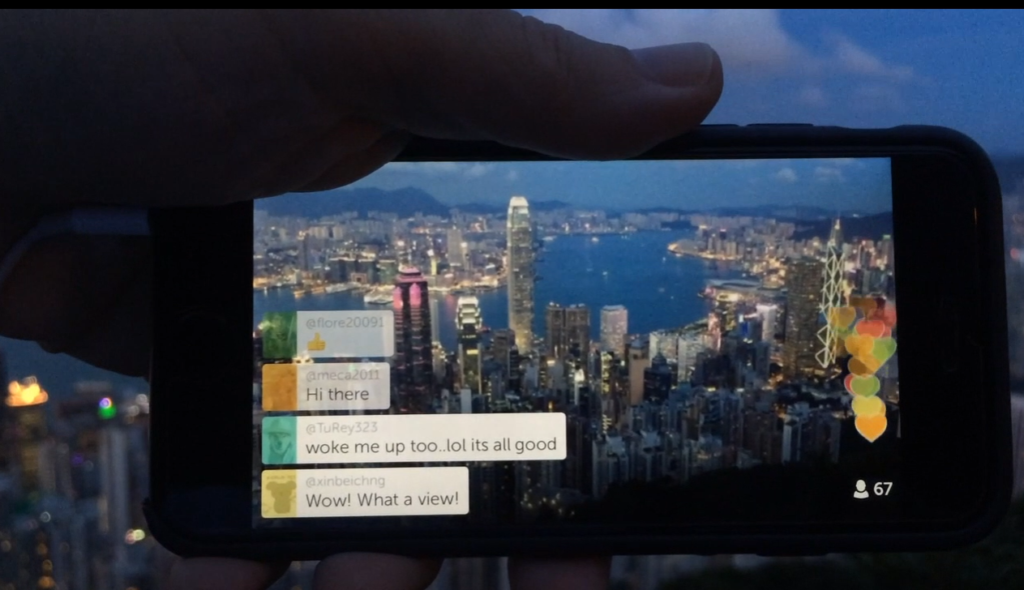 Enhanced following options At present to follow someone on Periscope you’ve got to slide the screen to the left (1), tap the profile (2) and then hit the follow button (3). This three step process was designed to prevent accidental follows, but has had the effect of making new subscriptions difficult and even confusing to new users. Broadcasters have to explain several times through a broadcast how to become a follower. “If you would like to follow, please slide left (or up for Android), tap my profile, and then click the follow button”. Periscope should consider going back to the old solution, where following was a bit easier. But if not then the other solution is already present in Periscope’s system. An automatic “follow this broadcaster” message appears in the chat (far too early) when you start watching a new Periscope, but if it was able to appear and reappear on a periodic basis throughout the chat new followers could more easily subscribe to broadcasters they wish to follow. A user setting to enable the ‘follow me’ message to appear every 1-5-10 minutes would be easy to implement and would eliminate the need for broadcasters to “beg” for followers every so often 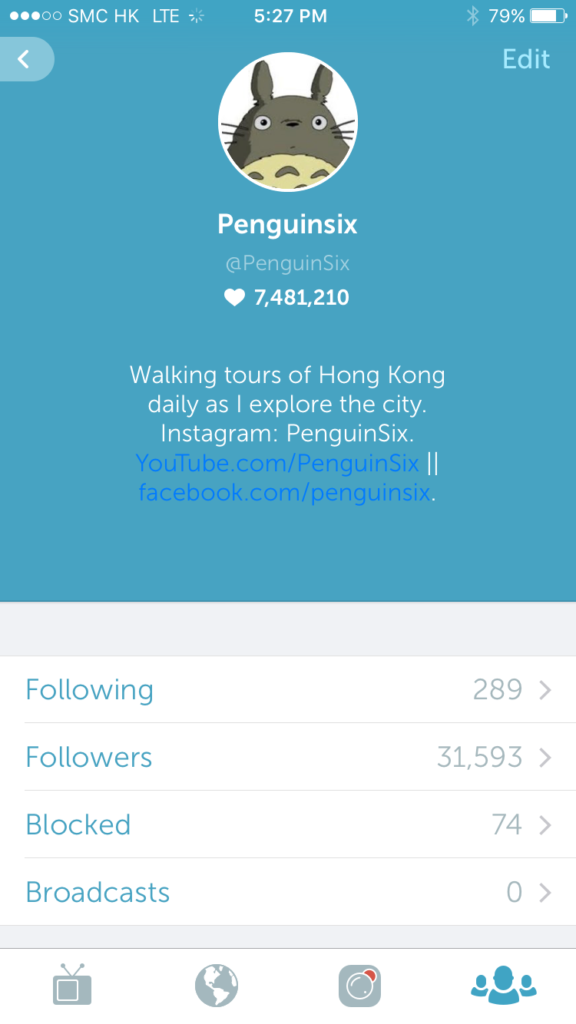 Analytics As Periscope grows into the professional world, the demand for detailed analytics will rise. How many users is great, but when are they watching, when are they turning off, how did they find my scope are all questions most other social media sites can offer their content creators. From a regular broadcaster perspective, some interesting additions would be something like “how many new people in the last five minutes”. I frequently do a broadcast that will hover around 100 people, but what surprises me is that very few of the 100 people at the end are the same 100 people that were there at the beginning.  People come in and out, thus requiring you to re-answer some simple questions, but you often don’t how many are new and how many are the ones who have stuck with you from the start.  Some sort of system where you could tell how many new watchers you have in a scope would be quite helpful. High Quality Upload I’m spoiled by 4k. Well not even 4k, but by 1080p at 60fps. The image quality of today’s phones is getting better and better, but due to the nature of live streaming of an HD signal is probably a monstrous bandwidth hog. Speak of hogs, here is a great example, I came across a breaking news story of a wild pig running amok through Central Hong Kong. The footage from my chase was used by the Guardian and the BBC, but unfortunately, the quality of the video was somewhat subpar vs. what I could have recorded in 1080p. [iframe src=”https://embed.theguardian.com/embed/video/world/video/2016/jan/15/hong-kong-riot-police-capture-wild-boar-video” width=”560″ height=”315″ ] If there is the option for a high quality video upload after the broadcast had ended, this would be a great addition for Persicope to roll out, especially if Periscope migrates toward longer playback and storage of previous scopes. Note I’m not talking about a delayed update like we used to have with the app, but an upload of a full 1080p version of the Periscope (though I suspect this might prove a tremendous technical difficulty with one version of the video being saved at 1080p and another being streamed at a lower bit rate, all on the fly at the same time). Overlays Overlays have become part of the standard television and even Youtube broadcasting environment. The ability to display and rend graphics on the screen while broadcasting is now available in even the simplest free broadcast tools. Adding some functionality to have an overlay of an image or even a ticker would be something some broadcasters, especially the professional ones, would find quite helpful. 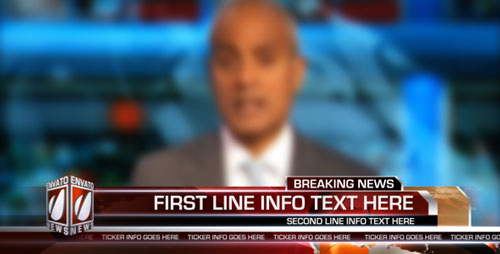 Edited Titles “See my lunch of noodles in Hong Kong” is an interesting title, but after starting a broadcast and getting a good crowd I generally don’t like to hang up on them as I leave the restaurant and go run my next errand. In fact broadcasts over 5 minutes rarely stay on the same topic as the original title. A Periscope starting on a mountain path could easily end up on a city sidewalk. A conversation about movies could change to politics. New users see a title and come expecting a noodle lunch or a conversation about movies and quickly get annoyed when they discovered the “missed that” part earlier. Giving the user the ability to keep his existing community and conversation ongoing without having to endure new users coming in expecting something else would improve the overall experience. And that’s enough for now….  ]]>