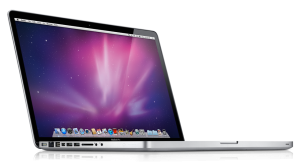 [/caption] Apple introduced the new line of MacBook Pro (MBP) laptops last night and like a lot of folks, I’m now stuck in a big debate. Do I buy the most recently updated MBP or do I go with the far sexier, cheaper, and less powerful MacBook Air (MBA)? So I started to make a list.  Note this is based on my usage patterns, my needs which may vary greatly from yours, so a few of these things you’ll be saying “ok, but that’s not important to me”.  Fair enough. There are a few “free throw” decisions you can make that will ease the discussion. If you want an 11 inch machine, the smallest they make, then you have no choice but the MBA. Conversely, if you want the 17 inch screen, your only choice is the MBP. So that leaves us with two flavors of the MBA ’13 and a MBP ’13 & ’15 inch. Again, if screen size is important, you can make a decision right now and pick the 15′ inch MBP. So let’s compare 13 inch MBA and MBP First things first: what is this computer for? For me, this is something in between my iMac on the desktop (where I do my heavy lifting of video editing, photo processing, server-like testing, etc). The laptop I have, an old MacBook Pro, is basically when I go out and need to do something more complicated than what I can do on my iPad. If was just browsing the Internet, replying to emails, and checking the news and social networks, it’s the iPad. The laptop comes out when I’m writing memos or doing some coding, rarely playing with images or video (but sometimes). [caption id="attachment_3278" align="alignleft" width="300" caption="MacBook Air"] 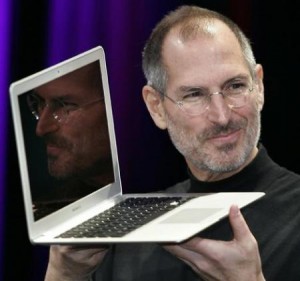 [/caption] First, the processor. The MBP are using the Intel processor codenamed “Sandy Bridge” under the more common name Corei5 and Corei7. This compares to the MBA which are running Core 2 Duo processors, which are somewhat less powerful than what you’ll get in the MBP. Of course it depends on what you are doing, but really I have to say the MBP is quite a bit more powerful. The top of the line MBA is 2.13GHZ and the the bottom of the line MBP is a 2.3GHZ Core i5. Advantage: MBP Second the memory. The problem with the MBA is that the memory is basically soldered to the motherboard. Unlike other computers, adding new memory is not a do-it-yourself project, and has to be ordered from Apple directly when you buy the machine so they can make it special. The base configuration of the MBA is 2gb RAM which is rather minimal, whereas the base install for the MBP is 4gb. The MBP can handle 8gb as an option but the MBA maxes out at 4gb Advantage: MBP Display resolution. Surprisingly this is an area where the numbers look better on the MBA. The screen is 1440×900 whereas the base 13 inch MBP is 1280×800. You do get slightly more megabytes shared with the main memory of the MBP vs the MBA (384mb v. 256mb) and they do run different chips. The 15 inch MBP uses AMD Radeon Chips, breaking away from Nvidia which is what the MBA is using.  The 15 inch MBP does have the same pixel numbers as the MBA however. Advantage: Your call. How important is the screen resolution vs. the different graphics chips. Storage: The MBA has a very sexy SSD instead of a bulky hard drive. The advantage of this is blazing fast speed, but limited storage. In fact the base model has only 128gb of storage available vs 320gb in the base MBP. Advantage: Really a toss up based on usage. If you have an external drive (and who doesn’t now days) or you use the cloud, then storage really isn’t an issue and the added speed will be nice from the MBA. But having to lug around an external drive and a cable negates one of the beauties of the MBA, the small form factor and weight. Battery: Both claim 7 hours of wireless web, but with the MBP having a DVD drive and a hard drive I will have to see it to believe it. Other bits: * Thunderbolt is what Apple and Intel are pushing as the new standard for massive data transfer from external drives, cameras, etc. Will it become the new standard in a few years? Maybe. But you won’t find it on the MBA just yet. Advantage MBP * The MBP has an “HD” webcamera built in, so if doing talking head videos of yourself is important this is something to consider. For me it makes no real difference. Advantage: moot * Ethernet. There is no ethernet on the MBA, you need an adapter which I find annoying as I live in a world of Cat5. But if you are wireless then it probably doesn’t make a big deal. Same goes for firewire. No port on the MBA but there is one on the MBP. If Firewire is important than advantage MBP. Weight. Oh this is the big one. Really big. As much as I have advantaged nearly everything to the MBP this is one issue that might turn everything on its head. The MBA weighs 2.3 pounds. The MBP is 4.5. Here are a few numbers to help realize that:

First, the device is never as light as advertised. You have the power cords and external drives, and it goes in a carrying bag that also adds some weight to it. My backpack that carries my laptop probably weighs a couple pounds in its own right. But the advantage of the MBA, and its slim form factor, is that this can be carried in basically a large envelope or a smaller bag. It’s not going to be a pain at the airport like a full sized laptop. Anyone who has done a long distance flight and slung a laptop over their shoulder knows that after an hour or so walking through airports you start to notice the ‘gallon of milk’ on your back. Advantage: MBA. Finally, Price. If I was buying a MBA, I would get the 13 inch, with extra memory and the larger SSD drive of 256gb. This means my final price would be $13,268 HK. For $11,388, I could get a 13 inch MBP with the same memory, a more powerful processor, and a large hard disk. Even if I doubled the RAM to 8gb I’d still be only $12,948. Advantage:  MBP So what am I going to buy? Honestly I’m not sure I’m going to buy either. I don’t “NEED” a laptop right now. I’m not traveling extensively, my old machine is still more than capable, and I fear that the next MBA update will address some of my concerns (better processor, Thunderbolt) and that the next MBP update will be a major revision to the form factor, shrinking the size down a bit and reducing the weight (maybe finally getting rid of the DVD drive I really have no use for). Guess this means I’m on the fence for another year or so.   UPDATE SUMMER 2011 Well we have a new Macbook Air and it specs out pretty nicely.  We’ll write a new review shortly, but the hints of a new Macbook Pro for Christmas (sans DVD player and thus a hell of a lot smaller) is going around the net.  Still on the fence for now, but here is the new MBA from Amazon.   ]]>