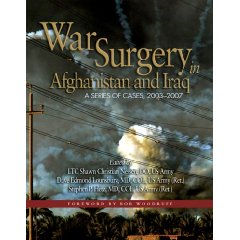 The Government Printing Office has a new title out that’s actually quite a big seller apparently. ”War Surgery in Afghanistan and Iraq: A Series of Cases, 2003-2007″ is written by military doctors and covers some incredibly gruesome casualties they’ve experience in Iraq and Afghanistan, both military and civilian victims. The book is being given to a number of hospitals (especially ER rooms who deal with gunshot wounds) and also to doctors arriving in country for the first time:

“The average Joe Surgeon, civilian or military, has never seen this stuff,” Lounsbury said. “Yeah, they’ve seen guys shot in the chest. But the kind of ferocious blast, burn and penetrating trauma that’s part of the modern IED wound is like nothing they’ve seen, even in a New York emergency room. It’s a shocking, heart-stopping, eye-opening kind of thing. And they need to see this on the plane before they get there, because there’s a learning curve to this.”

Amazon is sold out apparently. Unfortunately I suspect a lot of people are going to use this either for their own sick ‘glee’ and curiousity or for some sick political purposes (apparently the photos are pretty rough). The military tried to censor the book from coming out but doctors said it was needed and would save lives, so eventually the DoD relented.

War Surgery in Afghanistan and Iraq: A Series of Cases, 2003-2007 (Textbooks of Military Medicine)