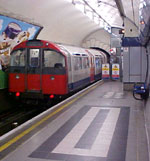 Kind of eerie story about a Tube driver who hit a suicidal person lying on the tracks. The driver is still a bit messed up by the whole incident, though that wasn’t the case with one of the people standing on the platform.

By the time we were stationary, four of my eight cars were in the platform and I was on autopilot. I told the passengers there would be a delay in opening the doors due to an “incident”, and was calling the line controller for assistance when I heard a tap on my cab door. A smart man inquired, “Do you know there’s a person under your train?” I looked at the blood on the windscreen momentarily before assuring him that, yes, I was aware.

He paused for a heartbeat, looked at his watch and said, “So, how long before we get on the move again?”

I was to look back on this exchange with amusement and also, strangely, comfort: in the midst of the horror, normality was briefly restored by a commuter asking for alternative travel arrangements.