<![CDATA[It was a dark and stormy night. Seriously, it was. It was pouring down rain and bitterly cold and the sun sets in London at about 3:00pm in the winter time making everything dreary, cold, damp, and miserable—save for the fact that tonight was my son’s chance to be the mascot for the Arsenal in the crosstown derby against <a href="http://www1.skysports.com/football/live/match/287446/report">Chelsea. We got the call up, well, email from the Junior Gunners a few months prior. “Please have your parents contact us” said the email addressed to my son’s usually empty email account. I did and the words coming across seemed somewhat surreal. “Your son was selected to be the mascot”  “Does he accept?” “You’ll be getting the logistical details from us shortly”. I was bouncing off the walls and faintly recall the echo of my wife said “maybe we shouldn’t tell him—keep it as a surprise?” as I walked into his room screaming “We’re going to see the Arsenal!” Of course there were some logistics that had to be swung into action. Although an American, we live in Hong Kong now and would have to coordinate not only the flights and accommodations for a trip over the Christmas holiday, but a few extra days to adjust to the jet lag as [email protected]#$%#@$% Sky Sports decided to move the game to Monday Night at 8:00 PM London time (4:00am Hong Kong time). For a few days prior we tried to stay up late and get up early, all to no avail (and in case you are wondering, a jet lag coming from this direction in the middle of Winter was the most horrendous I’ve ever faced). On game day we woke at our normal 2:00am or so, played around, and then forced the kids back to sleep about 10:00am until waking them just prior to our 5:00pm departure time. This wake up left us with one hour to get to the stadium, which was probably a mistake on my part. I did manage to show up at the media entrance exactly at 6:00pm, the required time for a mascot to arrive, only to have the steward say “this is the wrong entrance.”  Go this way and that and then around those things and down and….  Being a stupid guy I just grabbed my son and we dashed into the rain trying to figure it out as we go.  Ten minutes later in the midst of some Chelsea fans I decided to ask for direction. Luckily I found a fairly senior steward who knew exactly where we should be and we were off down a car park entrance to the underground bowels of the Emirates Stadium. After a security check and several paper towels to dry off, we were met by the Arsenal mascot liaison who walked us into the car park, past the large grass-growing lights that are parked underneath when not in use. We approached the bus entrance where I saw Jill Smith, Arsenal Supporter’s Club liaison, doing her usual magic before the game sorting out dozens of different clubs making sure everyone was in the right place at the right time. We were then rushed into a small locker room for the mascot and other Arsenal employees where my son was given a brand new Arsenal kit. He wore a long sleeve white shirt underneath though because of the cold that night as only Flamini goes out with short sleeves in the winter. 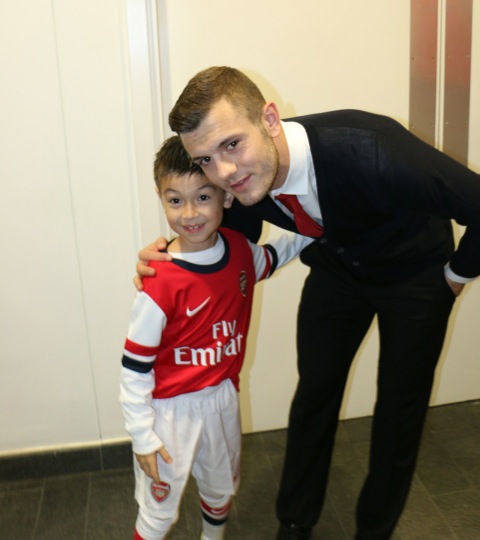 Out we went as word came that the Chelsea bus was approaching. We managed to catch Jack Wilshere standing around serving his suspension for a certain hand gesture to the crowd, but he was still willing to snap a few pics with us and the Chelsea counterpart.

Then it was out to the bus arrival area. Our mascot liaison went over the procedure. Chelsea’s mascot in the front for Chelsea, my son in front for the Arsenal. Hold out your hand and wait for them to shake it. Not everyone will but don’t get upset. Just turn to the next guy and go from there. Chelsea arrived first. My son, an avid collector of Match Attax trading cards, already knew every player getting off the bus, even a few the Chelsea mascot couldn’t recognize. He held out his hand and shocking hands / fist bumped the players coming in for the game. We then took a quick walk around the arrival lobby. There was a Christmas tree up and a nice photo of all of the 49 games undefeated in one giant poster. David Beckham was in the grounds somewhere but we missed him in the lobby. Oh well. Next up came word that Arsenal was arriving. This time my son was out front, shaking hands with the players as the fans on the sides were chanting out the chants for each one that arrived. Needless to say he had a pretty massive smile on his face. With the teams given a few minutes to get into the locker room, we were then escorted to the tunnel entrance, where you see the teams in the pre-game, for a visit with the team. This was a mascot-only event, as he was escorted by a member of the playing staff (one of the coaches) who took him around to meet every single player as they were getting dressed. Dad’s had to stay in the lobby.  He got an autograph from every player on dad’s old Arsenal jersey we brought with us for just this occasion, and afterwards a nice photo of him with all the players arrived from the Arsenal photographers. 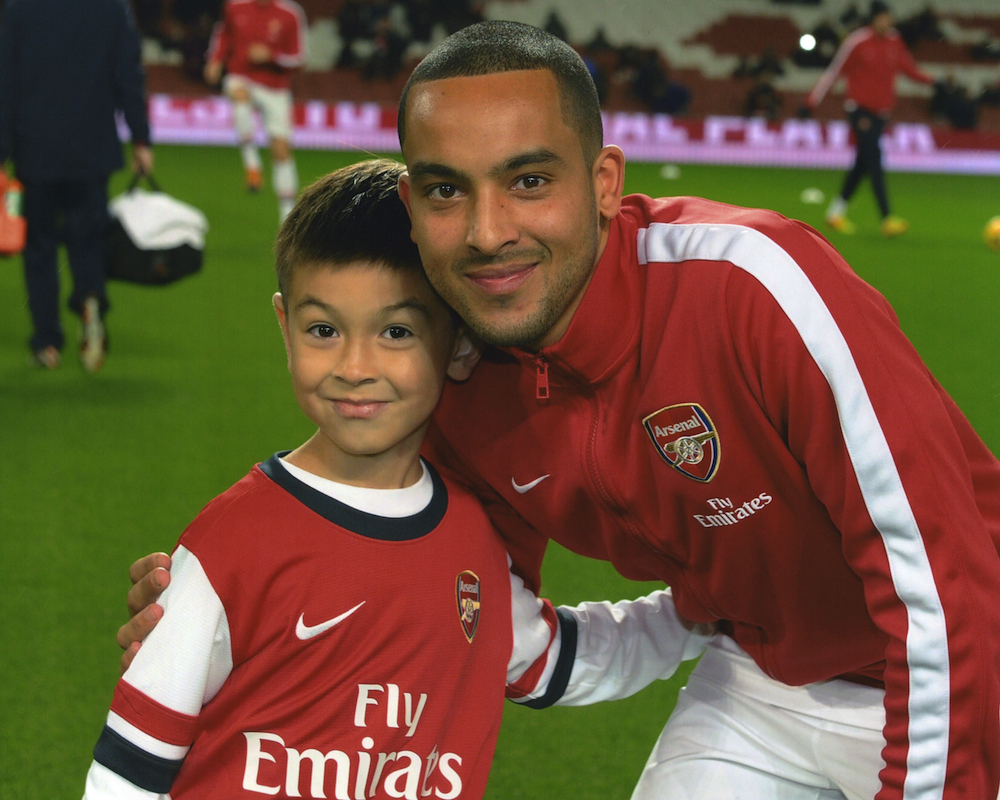 With the meet and greet done, we were escorted onto an elevator up to the club level where we went inside a restaurant / club (the one you see on the tour for those who have taken it) for a sit-down and explanation of what to expect. This was a 15-minute run down of what to expect, step-by-step when you took the field with the team. We even practiced the ‘tap on the shoulder’ which meant the pictures were done and the turn toward the referee to start the handshake line. Afterwards my son had to seek out the Gunnersaur for a kick about, and then Rex would take him to the center circle for the photo op. As simple as this sounds, we did go over it quite a bit. The eyes of the world were watching after all. If I can make just an aside here—it was at this point I realized how much bigger Arsenal has become since my days in the Highbury North Bank. The stadium, the staff, the overall ambience is so much “bigger” than it used to be. I always remarked how you used to be able to sit in the North Bank and look out to see the town houses around Highbury. It was just a part of the area, no big deal sort of. But now, in this monstrous stadium with staff everywhere and people and well—size—it was just kind of an epiphany about how “big” the club has become. We finished up the walkthrough, took a few pictures, and went back down the elevator to the tunnel. It was time to take the field for the first time since arriving. We walked out into the lights and light mist and everything just glowed. Despite the deluge, the grass was fine. There wasn’t ‘mud’ or anything like that as the drainage was keeping the field in playing condition. We noticed Jose was on the field as well, checking the grass to see how it was doing in the rain. As he came off he actually posed for a few selfies with some Arsenal fans in the stands. The players started to come out of the tunnel now for the pre-game warmup. Arsenal’s photographer came over and gathered my son for some one-on-one photos with the players on the filed. He selected four players and they chased them down as they went through the warm up. My son even got to take a shot against Szczesny. 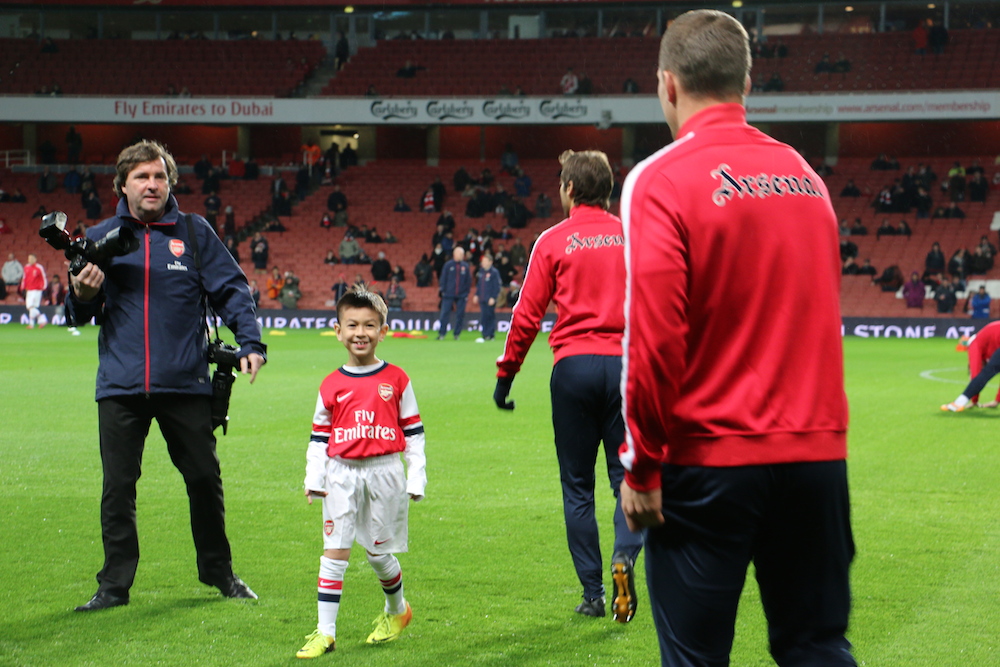 Lining up for his shot.[/caption] Following the photos, we were hustled back into the changing room for the last minute preparations. We packed up all of our items as we would not be coming back to this room after the start of the game. We then headed back to the tunnel entrance were the mascots were left to wait for the teams while the dads took up positions on the pitch to photograph the entrance onto the field. From Sky replays I saw later, my son was stuck waiting for the Arsenal team for about two minutes while the Chelsea team was already in the tunnel ready to take the field. Arsenal came out a bit late, and my son was all there by himself. Twitter had many comments on this about the “lonely little Arsenal mascot all by himself” but his escort was just to the side, out of the camera’s view. He stood there holding the Arsenal banner looking back and forth at the Chelsea side who he had seen so many times before in his trading card binder. I later asked him what he was doing and he just said “looking around”. I asked if he was nervous and he told me he was having too much fun to be nervous. 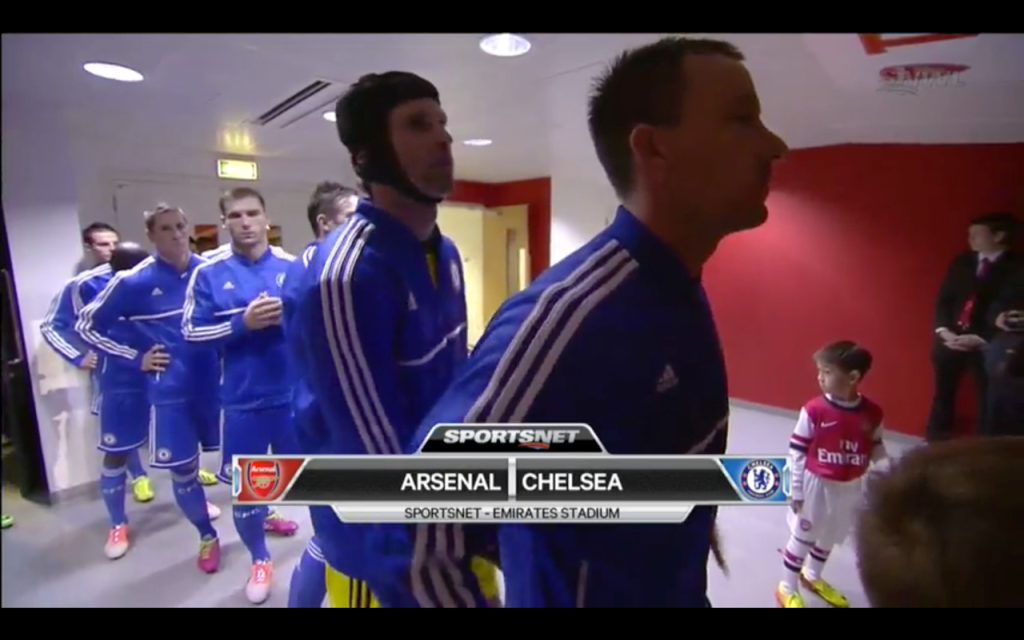 The sight of the tiny Arsenal mascot standing alone, waiting for his team, with Chelsea all lined up in tunnel was priceless.Take ’em on kid — Richard Ingham Evans (@Ringham7) December 23, 2013

My mother is going to cry if they leave the arsenal mascot on his own for any longer — Amy Joanne O’Neill (@OhNeil1) December 23, 2013

Arsenal eventually came out along with the referees. Mike Dean introduced himself to my son and patted him on the head (made a note to shave his head when we got home).  After a brief wait, they took to the field and commenced the grand entrance you see on TV. There were the handshakes and all that. I asked if anyone said anything like “good game” or anything like that and he said “no, they basically just grunted”.  He did his kick about and posed for the center circle photo before coming off the pitch with a huge smile on his face. 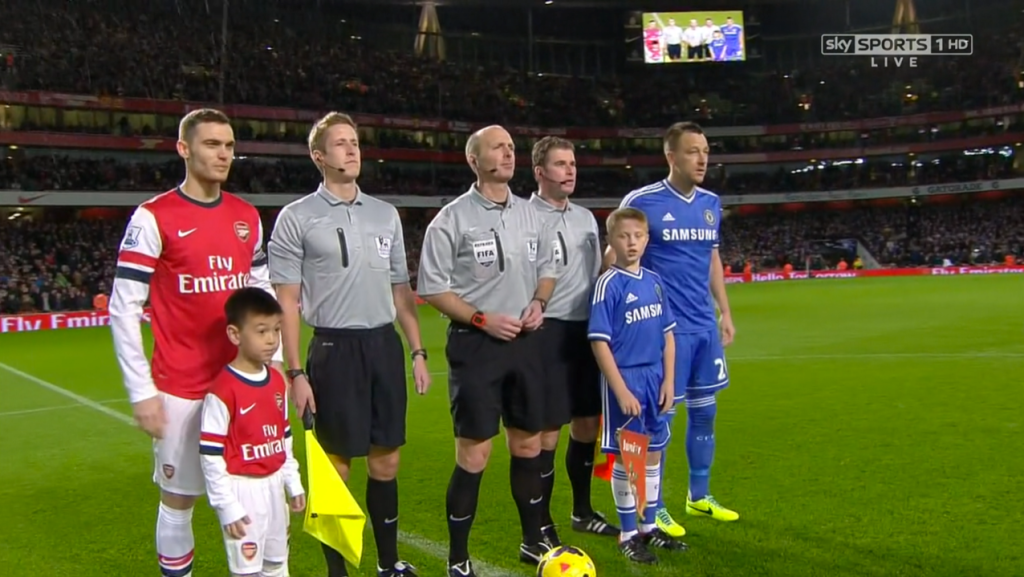